LONDON (Reuters) - Steelmakers' margins are due to deteriorate in coming quarters despite a fall in the price of raw material iron ore because steel prices have also slumped, pressured by weak demand.

"Even with the correction that we saw in iron ore, steel prices have fallen in just about every market, in Europe, the U.S. and China," said analyst Serafino Capoferri at Macquarie in London.

Benchmark spot iron ore for delivery to China hit a five-year high of $126.50 a tonne on July 3, having surged 74% over six months due to reduced supply from top exporters Australia and Brazil.

Since that peak, however, iron ore prices have slumped 26%.

"In the West, particularly in Europe, mills are really struggling. Demand there is weaker and the main headwind is the drop in car sales globally," Capoferri added.

The global automobile market, the second-biggest demand sector for steel after construction, has faltered recently due to declining economic growth, especially in top market China.

In China, total auto sales fell 6.9% in August, the 14th consecutive month of declines, as the top industry association warned of weak sales over the next three years.

Automakers in the U.S. market, the world's second-biggest, reported a sharp drop in September sales, while Moody’s cited the weak global auto market for keeping its credit outlook on Europe’s steel industry at negative.

"This will particularly hurt flat steel producers like ArcelorMittal, Thyssenkrupp and Tata Steel for whom automakers are important customers," Moody's analyst Goetz Grossmann said in a statement.

The slump in auto sales along with diminishing global economic growth have weighed on steel demand and prices.

The Chinese price of hot-rolled coil (HRC) steel, used in cars and home appliances, has shed 16% since July 1 while North American HRC prices have slid by 19% since Aug. 1.

Further erosion in U.S. steel prices is expected in the short term, Jefferies analyst Martin Englert said in a note.

Pressure on steel prices could also come from excess supply due to rising output in China during the winter.

In past years China has enforced closures and weaker production due to a strict crackdown on pollution during the main heating season, but this year the emission standards will be more flexible, analysts said.

"The overall target for air pollution control is tighter than last year, however it appears unlikely to result in material steel supply restrictions," UBS analyst Myles Allsop said in a note.

China steel production rose 6.6% last year to a record high, and so far this year has climbed 8.6%, according to the World Steel Association.

Japan's top steelmaker, Nippon Steel Corp, warned in August about weak margins due to surging iron ore prices, but there was a glimmer of optimism when prices came off their peak.

"(But) steel prices have now started to drift lower, possibly setting the scene for disappointment."

According to Reuters calculations based on Refinitiv data and consensus forecasts, the operating margin for U.S. Steel Corp is due to slide to 0.6% in the third quarter from 3.6% in the second quarter.

"To get improvement in steel margins, you need steel prices to recover, but it doesn't look very rosy for steel for next quarter or even for next year," Capoferri at Macquarie said. 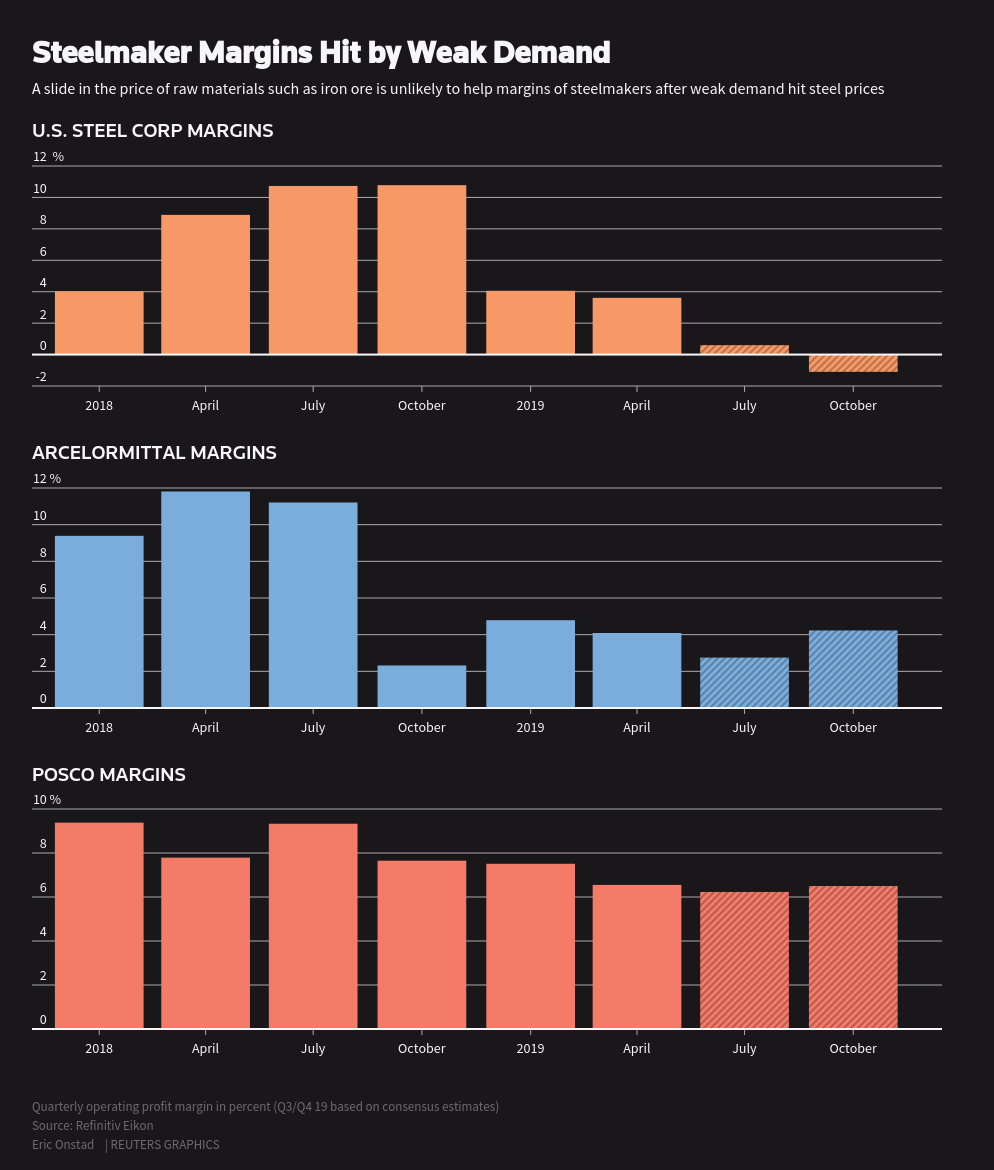 (Reporting by Eric Onstad in London; Editing by Matthew Lewis)