Close to balance at opening

Well on the way to opening in the wake of the Chinese manufacturing PMI index, which is slightly better than expected (51.8 compared to 51.5 expected), European markets are now increasing their losses, while D. Trump has announced the reintroduction of US customs duties on imports of steel and aluminium from Argentina and Brazil.
The S&P500 index, which finished down 0.4% to 3140 points on Friday, is now expected to be close to equilibrium, while futures were expecting a 0.5% gain this morning.

As for statistics, the PMI manufacturing index will be published in the United States (consensus 52.2) then  operators will be informed of the ISM manufacturing index, anticipated at 49.2 and construction spending which should increase by 0.3%.

Graphically, the trend remains bullish in hourly data above 3130 points. The lowering of this level would militate for the beginning of a consolidation towards 3117/3110 points initially or even 3090 points per extension. 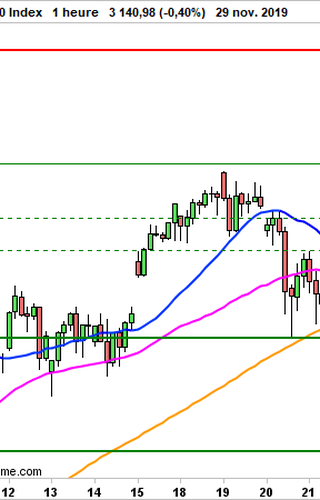