Amid frenzied selling in financial markets this week, there was a silver lining for banks and trading platforms which attracted a rush of business as investors scrambled to protect portfolios from the volatility.

European stock trading volumes swelled on Monday to more than three times their 90-day daily average, according to Refinitiv data, as share prices suffered their biggest one-day drop since the 2008 financial crisis and oil prices plunged 25%.

The resurgence will be welcomed by traders. London-based inter-dealer broker TP ICAP, for instance, has seen record-breaking volumes during the past fortnight's selloff, CEO Nicolas Breteau told Reuters on Tuesday.

"We had reached record volumes, with clients hedging, rebalancing their portfolios ... a lot of intense activity," Breteau said, adding that while the environment affected clients, the volatility offered TP ICAP an opportunity that "gives us confidence for the future."

Before March, trading desks at banks and elsewhere had suffered a prolonged period of low volatility and lacklustre volumes, crimping profitability.

Turnover of currency futures topped $200 billion on Monday, more than double the daily average reported year-to-date, data provided to Reuters by CME showed. That included more than $70 billion of trading in euro/dollar and $49 billion in dollar/yen.

EBS, which runs one of the world's biggest FX platforms, declined to give data for Monday but told Reuters that volumes for last week had run 80% above 2019 averages.

Refinitiv, another big forex market player, said Monday had been its busiest day for spot currency trading since the U.S. Presidential Election in November 2016.

The company declined to give the dollar value for Monday's volumes but said activity on its FX Matching platform was more than double the daily average traded during February.

Markets are now the most volatile since the financial crisis more than a decade ago.

Wall Street's so-called fear gauge has reached its most elevated since 2008, U.S. Treasury market volatility the highest since 2009, and price swings in the FX market are at three-year highs. 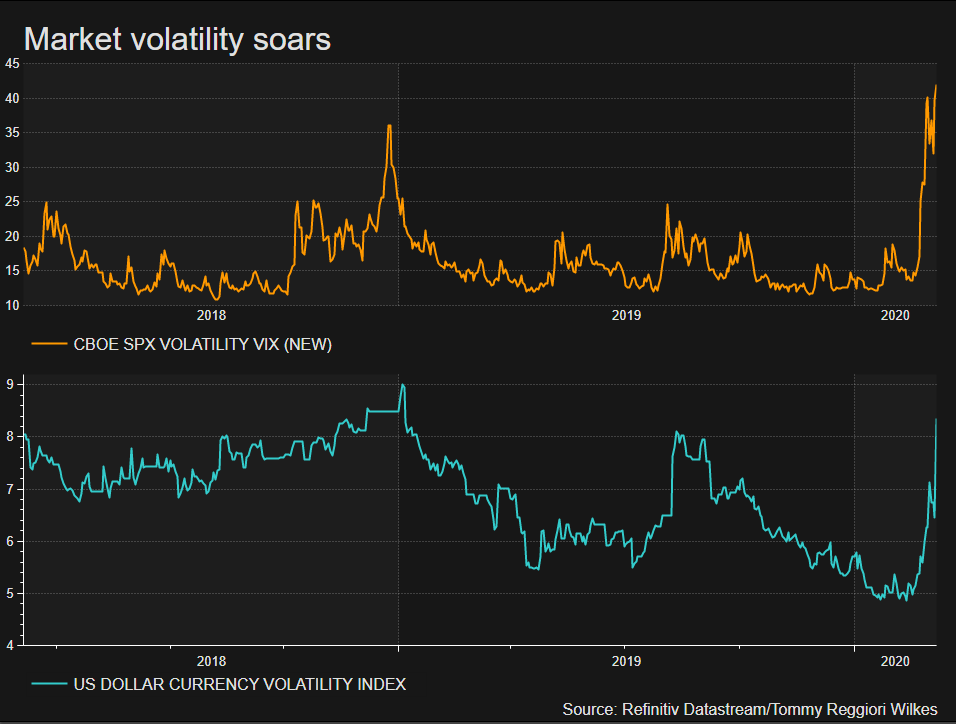 Bond trading platforms are also reporting increased activity as clients dump riskier bonds and pile into the safety of government debt such as U.S. Treasuries, where yields have collapsed to record lows.

However, the rise in volumes last week was not dramatic and Monday actually saw reduced activity, suggesting many investors had stuck to the sidelines.

"While we don't report our trading activity on a daily basis, we continue to experience strong volumes across our platforms in line with broader market volatility," Tradeweb said.

There is some evidence that the jump in volatility may also be undermining liquidity - the ease with which buyers and sellers can transact without moving the price.

Prior to Monday, traders say frenzied trading activity had generally been orderly.

"In the morning, we tried to trim a position in the benchmark 30-year US Treasury bond and were shocked when several dealers were reluctant to show us a firm price, something we can't remember ever happening before," TwentyFour Asset Management said in a daily note, referring to Monday.

"Normal service resumed shortly afterward, but to us this was a stark illustration of the sheer panic that permeated the market."