Sterling rallies in best week vs dollar since early June

LONDON - The pound surged ahead against a falling dollar on Friday and cable was set for its biggest weekly gain since the first week of June, although investors remained cautious about data pointing to an economic recovery.

The dollar index was down 0.4% on the day, held down by a delay in the stimulus package bill, rise in COVID-19 cases and U.S.-China tensions, meaning that after a shaky start in early London trading, cable strengthened as the session wore on.

British PMI data beat all forecasts in a Reuters poll of economists and shot up to 57.1 in July from 47.7 in June, indicating activity began to grow again after collapsing during the lockdown which began in March.

But the data had limited market impact, as quickening growth does not mean a return to normal levels.

"I'm very cautious in reading these figures because even if they stayed at these elevated levels for a protracted period of time, it will take until next spring to get back to where we were in terms of output levels," said George Buckley, chief European economist at Nomura.

Retail sales recovered to almost pre-lockdown levels in June and a survey measuring employers' confidence in hiring and investing also rose, turning positive for the first time since February.

At 1524 GMT, the pound was up 0.4% against the dollar at $1.2789. It has rallied some 4.4% since its low of $1.2252 at the end of June and was up 1.7% on the week, having been helped by bullish markets at the start of the week turning optimistic over a potential coronavirus vaccine and the European Union's agreement on a massive fiscal stimulus plan for the bloc.

Sterling was even set for a slim net weekly rise against the euro, which eased off some of its recent gains on Friday. The pound was up around 0.1% on the day versus the euro, at 90.965 pence per euro . 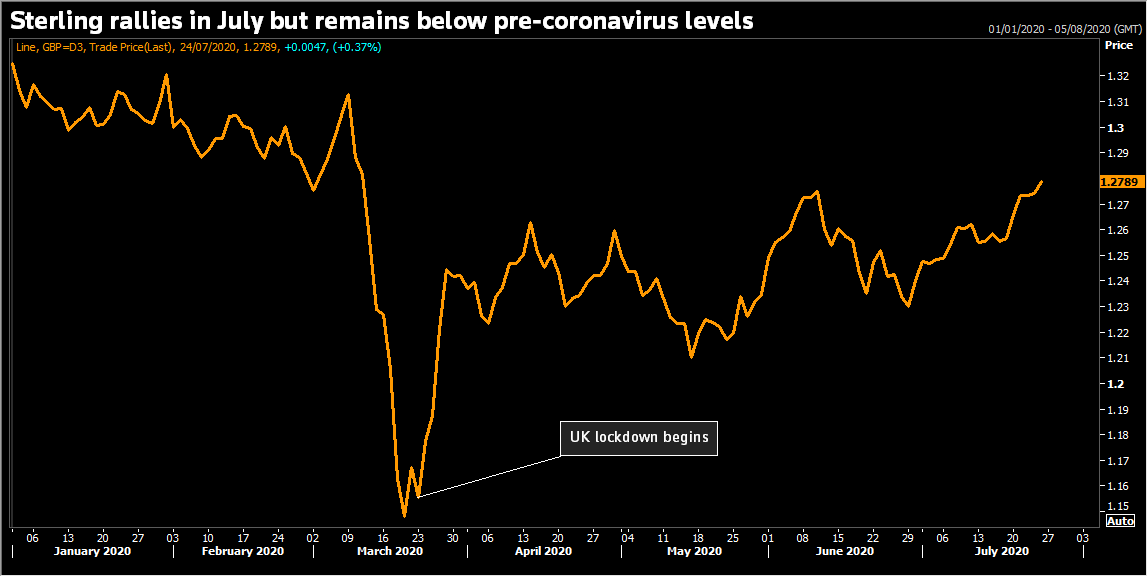 Britain and the European Union clashed on Thursday over the chances of securing a free trade agreement, with Brussels deeming it "unlikely" but London holding out hope one could be reached in September.

"In the past week, sterling has been somewhat caught in the middle between an appreciating euro and a depreciating dollar," UBS strategist Gaétan Peroux wrote in a note to clients.

"As attention moves from the EU Recovery Fund possibly toward the ongoing Brexit talks we see potential for sterling to rally on positive sentiment around those discussions," he said.