The rapid accumulation of gold by investors as the coronavirus crisis erupted earlier this year has slowed, threatening the record-breaking rally in prices of the precious metal.

Investors seeking safety in gold, which typically holds its value during troubled economic and political times, have offset a collapse in jewellery demand and helped push prices above $2,000 an ounce for the first time.

They have added about 959 tonnes of gold worth $60 billion at current prices to their holdings in physically-backed Exchange Traded Funds (ETFs) so far this year, according to data from the World Gold Council (WGC).

But in August and so far in September, ETF holdings saw net inflows of just 39 and 21 tonnes respectively, the WGC said, coinciding with gold's first two monthly price falls since March.

"Gold ETFs are a real-time gauge of safe-haven demand," said Julius Baer analyst Carsten Menke, adding that investors' appetite for gold in ETFs should slow and even reverse as the global economy recovers.

European funds registered net outflows of about 11 tonnes in August -- their first since November last year, mostly from German funds. 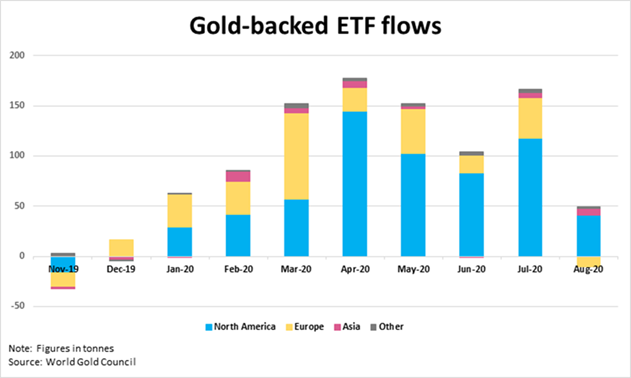 Gold consumption in Asia, where jewellery, bar and coin buyers account for more than half of global demand, has plunged since the coronavirus struck.

"This is creating an awful lot of gold that has to be absorbed," said HSBC analyst Jim Steel, predicting prices could move lower in the short term.

But others think the pandemic-led economic gloom will further feed demand for gold holdings in ETFs later this year. 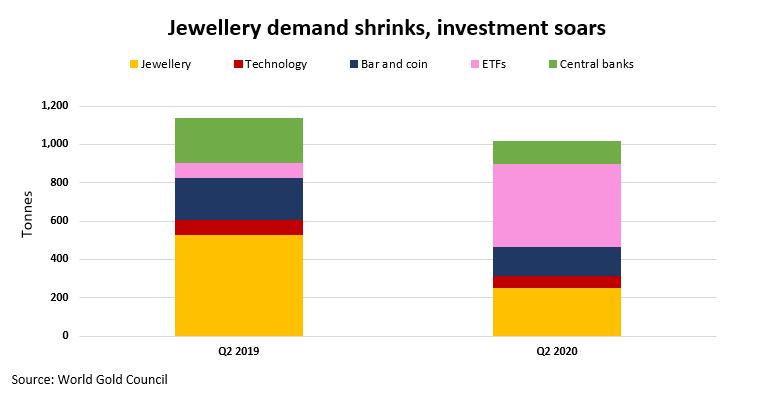 Uncertainty surrounding the U.S. Presidential election in November is also likely to be crucial for investor demand. The amount of gold held in North American ETFs rose about 39 tonnes in August.

"After the election, if gold starts making new highs, you will see fresh and sizable inflows back into gold ETFs," said Robin Bhar, an independent analyst.

By Arundhati Sarkar and Sumita Layek