Investor caution over renewed coronavirus-related lockdowns buoyed the dollar and snapped a five-day rally in most world equity markets on Tuesday, but was not enough to halt a hot streak in Chinese stocks.

The dollar edged higher as risk currencies such as the Australian dollar took a breather from recent gains and gold dipped as investors booked profits after bullion rallied to a near eight-year peak, trading around $1,780 an ounce.

Bourses in London, Paris and Frankfurt fell about 1% for most of the session before paring some losses, while losses were greater on Wall Street even as the Nasdaq posted a fresh intraday high before closing down.

The greater Miami area in Florida became the latest U.S. coronavirus hot spot to roll back its reopening. Cases surged nationwide by the tens of thousands and the U.S. death toll topped 130,000.

Stocks have rallied on the belief therapies and vaccines will be developed to deal with the coronavirus and that the United States has enough experience with the pandemic to avoid economy-wide lockdowns, said David Joy, chief market strategist at Ameriprise.

But the three states where infections are currently the most intense - California, Texas and Florida - are the three most populous and account for almost one-third of U.S. gross domestic product, Joy said.

"Other countries have shown it is possible to knock this virus down," Joy said. "But it takes social discipline and that seems to be in short supply here."

Lockdown measures were also reimposed in Melbourne, Australia, confining its nearly 5 million residents to all but essential travel for another six weeks.

Corporate earnings are expected to fall by about 20% percent this year following the deepest recession in more than a century. Pictet Asset Management expects a 30% to 40% slump.

"But that does not mean equity and corporate bond markets are due a sharp fall," said Luca Paolini, chief strategist at Pictet Asset Management.

Paolini predicted the U.S. Federal Reserve will inject a further $1.3 trillion of stimulus this year and the European Central Bank will add another 1.1 trillion euros ($1.24 trillion).

The euro zone economy will drop into a deeper recession this year than previously expected and take longer to rebound, the European Commission forecast. The commission said the 19-nation single currency area would contract a record 8.7% before rising by 6.1% in 2021, worse than its previous forecast.

Analysts said signals from the Chinese government through a state-sponsored journal on "fostering a healthy bull market," published on Monday, helped the buying binge in Chinese shares.

The Shanghai index pared earlier gains of more than 2% as investors consolidated their positions after some analysts drew parallels with a stock market boom-and-bust five years ago.

Copper prices soared to their highest in more than five months due to strong demand prospects in top consumer China and worries about supplies from Chile, the world's largest producer of the red metal.

Spot gold rebounded to within striking distance of $1,800 an ounce on the potential that a sharp jump in COVID-19 cases would lead to more accommodative monetary policy measures and greater demand for the safe-haven metal. 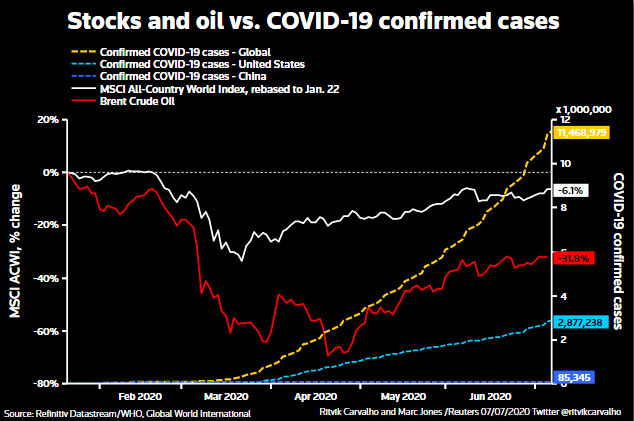 (Reporting by Herbert Lash, with additional reporting by Ross Kerber in Boston; Editing by Bernadette Baum and Will Dunham)