The Yen and Swiss Franc continue to rise on foreign exchange after Donald Trump relaunched the trade war by threatening China with new taxes, pushing major central banks to react.

In the wake of the first FED rate cut since 2008, the American President has once again been agitated on the front of the trade dispute between Beijing and Washington. Trump promises 10% customs duties on the equivalent of 300 billion dollars of Chinese imports, so far spared by the Sino-American quarrels.

China is threatening retaliation as the greenback has crossed the 7 yuan mark for the first time in 9 years. This was an opportunity for Trump to get even more excited by denouncing "a manipulation of money".

For their part, the countries most dependent on the Asian giant's health are waging a war. While the Bank of Australia (RBA) opted for the status quo, while assessing the impact, particularly on the labor market, of the two successive cuts in June and July, the New Zealand central bank surprised economists. While an adjustment of 0.25% was expected, the RBNZ reduced its key policy rate by half a point, which now stands at a new all-time low (1%). At a press conference, Governor Adrian Orr even suggested that this first tightening since November 2016 could be preceded by further easing until negative rates are used.

Similarly, India and Thailand reduced their key rates to 5.4% (-0.35%) and 1.5% (-0.25%) respectively, decisions that would maintain pressure on both the Rupee and the Baht. While this is the fourth decline of the year for India, Thailand is reducing the interest rate for the first time in more than four years.

Reactions that annoy the White House resident a little more, who is still attacking the FED, demanding that it reduce rates "quickly and sharply", calling it "incompetent". A new bloodbath that comes the day after an article in the Wall Street Journal in which the four previous leaders of the American central bank (Volcker, Greenspan, Bernanke, Yellen) demand respect for the independence of the monetary authority.

And with all due respect to Trump, new actions on the other side of the Atlantic do not seem to be in order. While two FED members have already voted against the July 31 cut, the statement does not suggest that the committee is more concerned than before. At a press conference, President Jerome Powell said that there would not necessarily be several similar decisions this year. Finally, James Bullard, one of the FOMC's most flexible personalities, recently said that the FED had already "done a lot" to support growth and that rates were currently "in the right range".

In this context, the latest monthly report on US employment, which was rather in line with forecasts, did not have a significant impact on trade.

On the Brexit front now, Boris Johnson's strategy is simple. Raise the specter of a no deal to crack the unity of the 27 and force them to renegotiate the Irish backstop. However, this is a risky strategy, while the majority of Westminster MPs are opposed to an exit without agreement. This strategy could therefore lead to a motion of no confidence and the early dismissal of the British troublemaker at the start of the parliamentary term in September.

For its part, the Bank of England endorsed a new status quo at its last monetary policy meeting. While the institution has lowered its growth forecasts due to the global slowdown and concerns about Brexit, Her Majesty's money does not appear to be considering further easing in the short term. The "marked depreciation of the pound exchange rate" they observed is certainly one of the best explanations.

Apart from a report from the RBA tonight, traders will be watching mainly macroeconomic publications in the coming days, such as growth in the United Kingdom and Canadian unemployment on Friday, the rise in US consumer prices on Tuesday and British inflation on Wednesday.

After briefly moving below USD 1.21, the Pound offers itself some respite but gets stuck near its floor, hovering around USD 1.2123. We are out of parity.

On the safe haven side, the Franc is further strengthening against the Euro and is now evolving at levels that should convince the Swiss National Bank to become more involved in trade. Under CHF 1.10, we are long-term buyers.

The Yen is also taking advantage of the context and the USD/JPY pair is moving out of its range, crossing its low range, to follow a clear downward trend since last April. In such a context, both fundamental and technical, we favor rebound sales.

Finally, the currencies from Australia and New Zealand continued to fall in response to escalating trade tensions and the RBNZ decision, suggesting more monetary stimulus in both economies. The Australian Dollar has briefly moved to new levels in more than a decade while its New Zealand counterpart is gradually moving towards such extremes. Here too, we will limit ourselves to rebound sales. 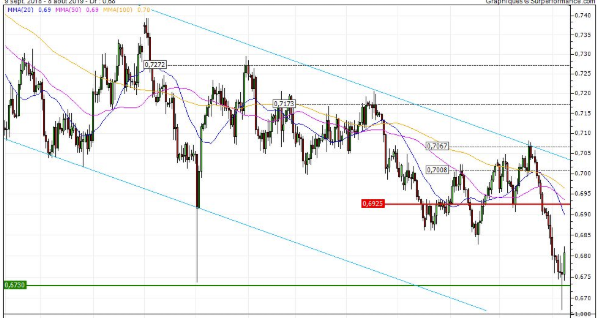