BRUSSELS (Reuters) - The euro zone economy rebounded much more than expected in the third quarter from its coronavirus-induced slump, but the recovery is likely to be cut short as countries reintroduce restrictions to stem a second wave of the pandemic.

Gross domestic product in the 19 countries sharing the euro surged 12.7% quarter-on-quarter in the third quarter after contracting 11.8% in the second, the European Union's statistics office, Eurostat, said. Economists polled by Reuters had expected a 9.4% quarterly rise.

"A whopping 12.7% rebound in GDP in the third quarter is a bittersweet result with new lockdowns just being announced. That makes a double-dip unavoidable," said ING economist Bert Colijn.

The euro zone average was boosted mainly by the countries that experienced the harshest lockdowns in the second quarter --France, Italy and Spain -- which all registered quarterly growth between 16.1% and 18.2%, preliminary data showed.

Yet, France and Germany will introduce extensive lockdowns for all of November raising the prospect of another economic contraction in the fourth quarter.

Keen to avoid a repeat of the recession, Italian Economy Minister Roberto Gualtieri said it was the government's "absolute priority" to avoid a national lockdown that would derail the third quarter recovery.

Year-on-year euro zone economic output was still 4.3% lower in the third quarter, though an improvement on the 14.8% annual contraction in the previous three months. That beat market expectations of a 7.0% year-on-year decline. 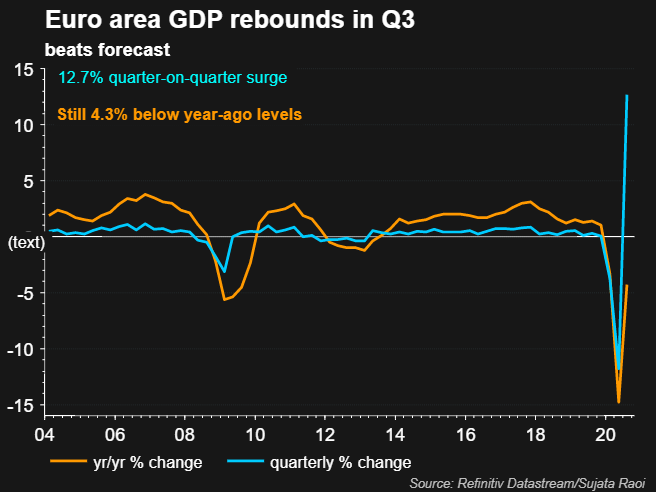 Germany, the euro zone's biggest economy, grew 8.2% quarter-on-quarter. The increase led Germany to revise its economic forecast for the year to a 5.5% contraction, instead of the 5.8% it had expected earlier.

"Large parts of the euro area economy recovered quickly from the sudden stop in spring. Private households, who have consumed almost as much as before the crisis, have made a major contribution," said Commerzbank economist Christoph Weil.

But signs of weakness were already showing. German retail sales fell more than expected in September.

"The outlook for the final quarter of 2020 has recently become noticeably gloomier. Corona restrictions have been drastically tightened again in many countries. This will not remain without consequences for the economy," Weil said.

Consumer prices in October were 0.3% lower year-on-year, as expected by economists polled by Reuters, the same rate as in September, after a 0.2% month-on-month increase, vindicating the European Central Bank's plans for further monetary support for the economy in December.

Amid the economic rebound, euro zone unemployment was flat in September from August at 8.3% of the workforce, as expected, despite edging higher in absolute numbers by 75,000 people.

"Today's figures reflect only partially the situation of the labour market given that furlough and short-time work schemes are still in place to prevent mass layoffs," said Rosie Colthorpe, economist at Oxford Economics.

"In the coming months, with the deteriorating health and economic outlook, we expect further slack in the labour market to be partially offset by the extension of the furlough schemes," she said.