By comparison the average equity-focused hedge fund is down 15.5% for the month through Thursday, with average year-to-date losses at nearly 16%, data from Goldman Sachs show.

The numbers were released just hours after Ackman wrote to investors to say he had taken off the hedges and was becoming "increasingly positive" on stock and credit markets.

The moves helped inoculate his portfolio from the type of losses that many hedge fund investors are bracing to see when managers finalize their March numbers next week.

Ackman earned $2.6 billion in proceeds from the hedges and said that he had reinvested most of the money in existing holdings Agilent, Berkshire Hathaway, Hilton Worldwide Holdings, and Lowe's.

One week after taking to Twitter, television and text interviews with impassioned pleas for a 30-day shutdown of the United States to stop the virus' spread, Ackman said his outlook had brightened. Moves by states and federal and Treasury monetary helped, he said.

Performance however may remain volatile, the manager warned, saying he might have to sell recently bought holdings or go back on the defensive. 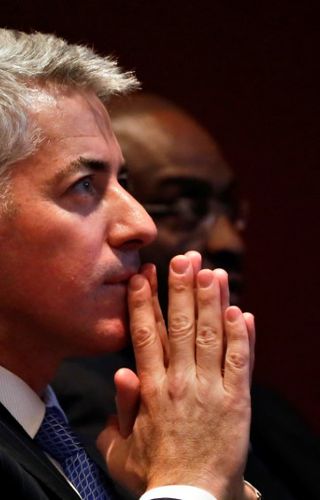