Bank of England Governor Mark Carney said on Thursday that the central bank could cut interest rates if it looks like weakness in the economy will persist.

His comments sent sterling to a near two-week low against the U.S. dollar as he outlined a debate on the Monetary Policy Committee about whether interest rates needed to be cut now.

Last month and in November, two of the nine policymakers on the BoE's interest rate-setting committee voted to cut interest rates to 0.5% from 0.75%, though Carney himself backed keeping rates on hold.

While Carney also described reasons for optimism, investors honed in on the comments about a possible rate cut, which he linked directly to the current economic outlook -- whereas previously he talked about cuts more as a contingency.

"With the relatively limited space to cut Bank Rate, if evidence builds that the weakness in activity could persist, risk management considerations would favour a relatively prompt response," Carney said in a speech at a BoE event on inflation targeting.

Similar language was used in the most recent MPC minutes by Michael Saunders and Jonathan Haskel, who both voted for a rate cut.

Money markets now price in a roughly 14% chance of a rate cut at the BoE's Jan. 30 meeting, Carney's last before he hands over the reins to Financial Conduct Authority chief executive Andrew Bailey, who takes over on March 16.

Markets price in a roughly 50% chance of a rate cut by the middle of the year.

"While this shouldn't come as a huge surprise given that there has been a couple of MPC dissenters calling for lower rates at the past two policy meetings, it is the strongest hint yet for a rate cut in the not too distant future," currency strategist David Cheetham of brokerage XTB said.

On asset purchases, Carney said there was room to "at least double" the BoE's 60 billion pound stimulus package of August 2016, a sum that will increase further as more government bonds are issued over time.

He also said there were early indicators that there had been some reduction in business uncertainty since Johnson's sweeping Dec. 12 election win.

The rest of his speech focused on possible changes to the BoE's inflation targeting framework, which he said had served Britain well.

Carney said raising the inflation target, as advocated by some economists as a way to spur growth and escape from years of low interest rates, worked better in theory than in practice.

He also pushed back against those who think the BoE should use its quantitative easing stimulus to directly fund infrastructure or environmental spending.

"In my view, these should be resisted," Carney said. "While carefully circumscribed independence is highly effective in delivering price and financial stability, it cannot deliver lasting prosperity and it cannot address broader societal challenges."

By Andy Bruce and David Milliken 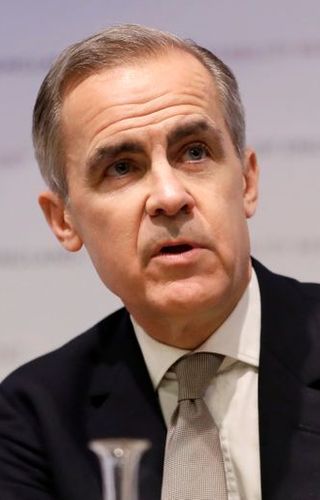