By Mai Nguyen and Tom Daly

A stunning V-shaped recovery in the price of copper is looking stretched as top consumer China enters its summer construction slowdown and fears of supply disruptions from the coronavirus have been mostly priced into the market.

Benchmark three-month copper on the London Metal Exchange leapt 21% in the second quarter - its best quarter in a decade - on a strong post-virus recovery in China, fears of supply upsets, a weaker U.S. dollar and massive global stimulus.

The metal used in everything from construction to consumer goods has now recovered all of its losses in 2020, rebounding back past $6,000 a tonne.

However, as the hot, wet summer months have arrived in China, many construction sites are slowing work, stripping away a key driver of copper's recent rebound.

"Orders in June were lower and we expect them to be worse in July. June to August are seasonally weak," said a copper rod maker in Guangdong whose plant ran at full capacity in March and April and at a slightly lower rate in May.

"Will orders pick up in September? That needs to be confirmed later. We are mainly following the real estate and national grid figures," said the maker, who supplies the power and construction sectors.

Graphic - Copper outperforms other base metals in Q2: 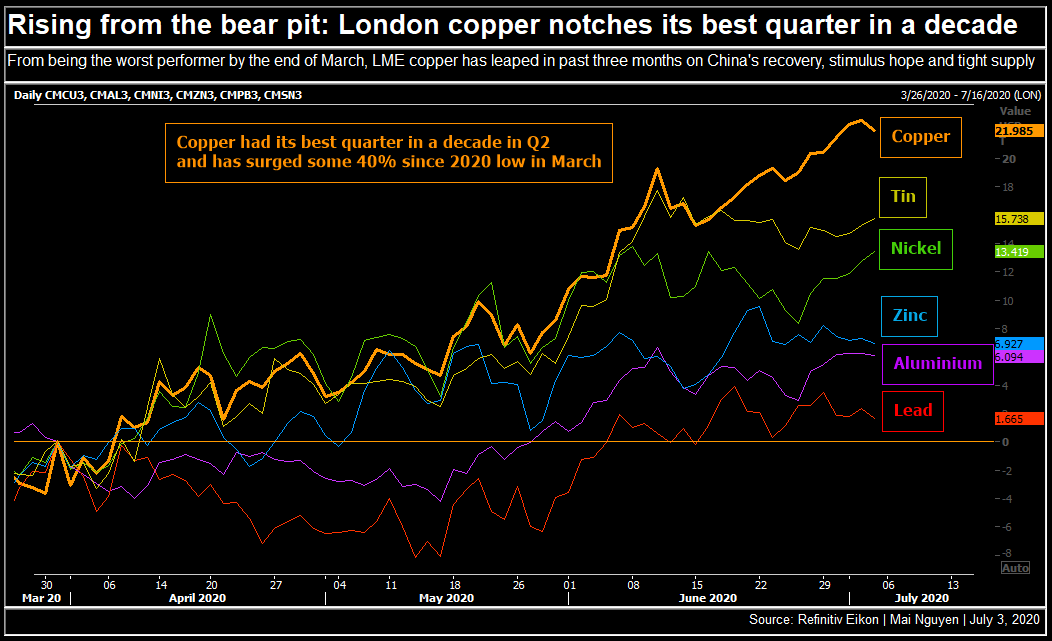 Meanwhile, export orders for copper-rich goods such as air conditioners from outside China remain weak, even as countries start to emerge from COVID-19 lockdowns.

"From mid-May to now - and we think it's going to continue for the coming months or so - is the slowing of demand," said Yanting Zhou, an analyst at consultancy firm Wood Mackenzie.

A move by fabricators to turn to scrap due to surging refined metal prices has also hurt demand, she said. 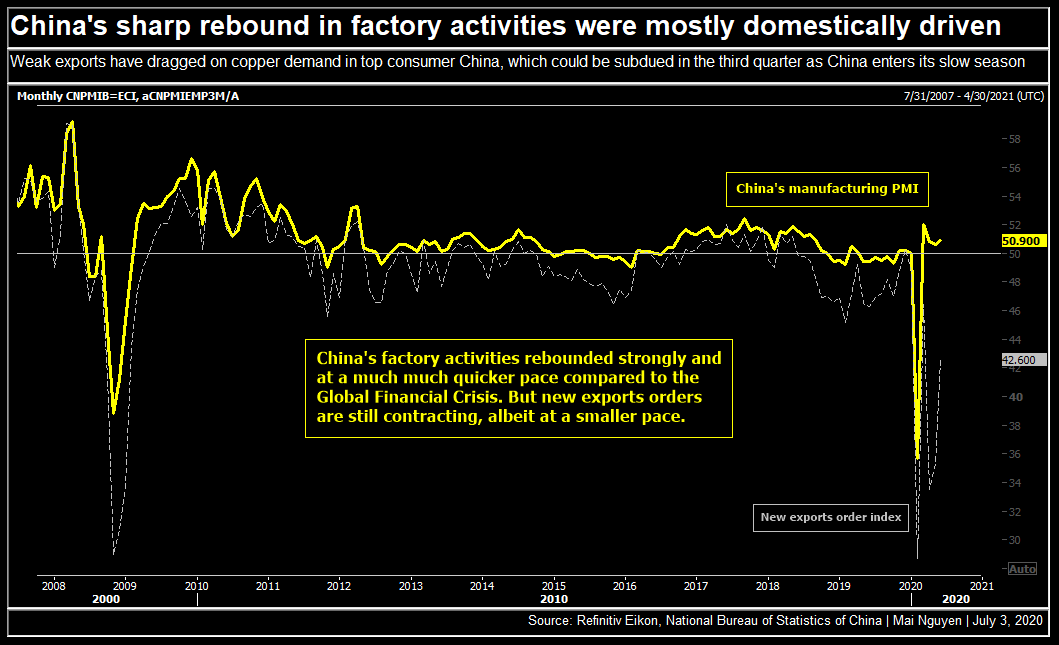 Copper's recent surge has been propped up by fears that the spread of COVID-19 could disrupt mining in top ore producer Chile.

Coronavirus cases spiralled upward in May and early June, leading powerful labour unions to pressure the government and mining firms to scale down operations to ensure employee safety.

The rate of new cases has slowed and the country's copper output in January-May rose 3.2% from a year earlier, according to calculations based on data by Chilean copper commission Cochilco, but the worries remain.

"If the supply situation in Chile was not occurring, we would have seen a price contraction by now. Once this is priced in, we will likely see prices fall below ($6,000) again," said analyst Natalie Scott-Gray of broker StoneX.

Supply, meanwhile, is rising. In China, where around 70% of the refined copper consumed last year was made domestically, production rose 2.7% year-on-year in January-May, official data showed.

"Cathode production is likely to be stronger than Q2 because of less maintenance and ... we expect to see more cathode from scrap, or semi-fabricators producers having more access to scrap," Wang added.

Graphic - The global copper market is expected to swing into a surplus this year, from a deficit in 2019: 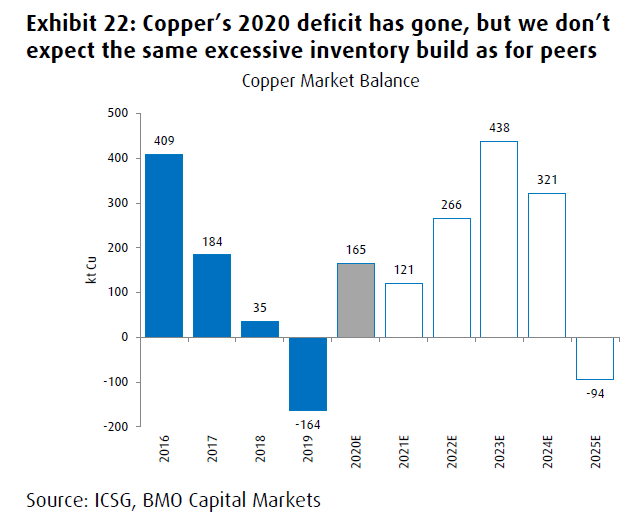 Outside of China, major economies are facing a bumpy road to recovery.

"The market will realise that ... ex-China demand is contracting and stimulatory measures will take time to translate into real-demand," said ANZ commodities strategist Soni Kumari.

Surging virus cases in several countries including the United States, the world's biggest economy, raise concerns of a second wave of lockdowns. 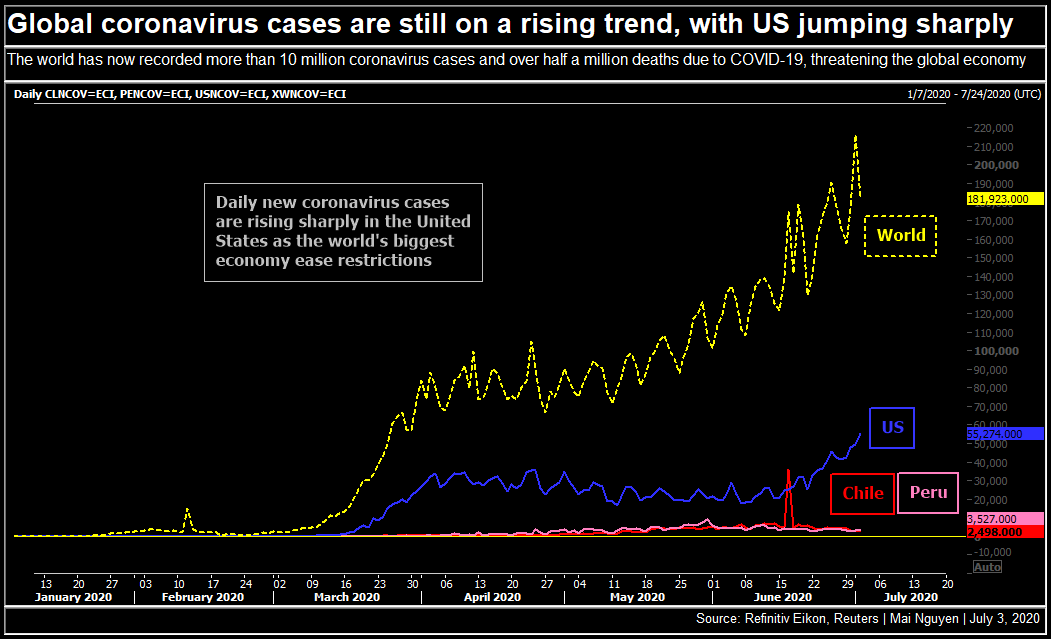 Still, copper is viewed as having a bullish long-term outlook due to massive infrastructure stimulus.

"If you're thinking 'It's fine I can take the summer off, come back and buy copper at $5,200 in September for a nice year-end rally,' I would say it's a very risky strategy," said Guy Wolf, global head of market analytics at broker Marex Spectron.

Graphic - Copper inventories are falling across the board: 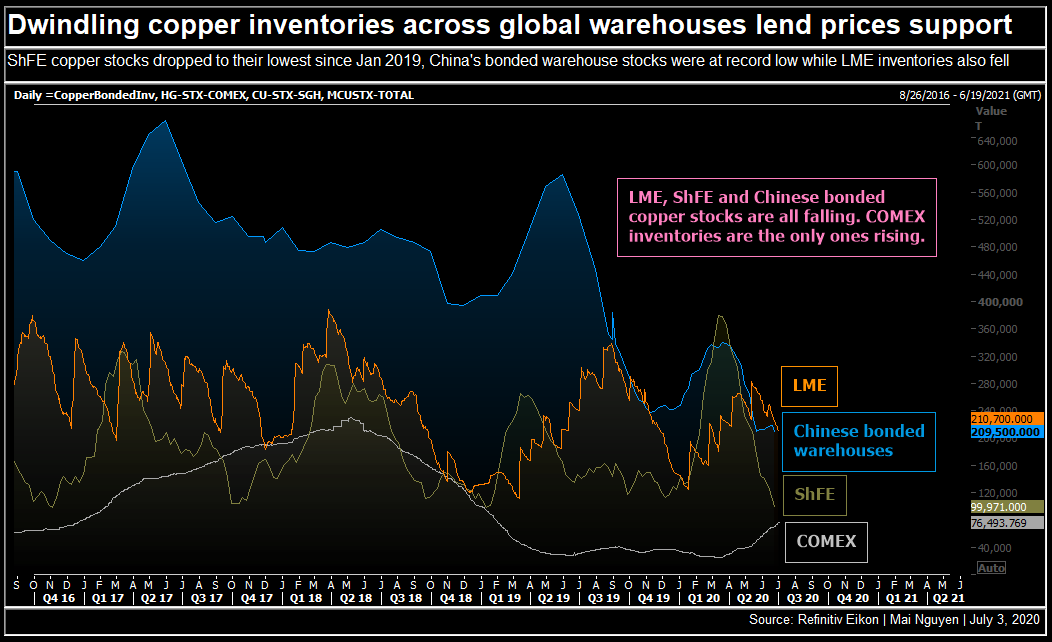 However, when and how much of these stimulus packages materialise, and whether the coronavirus pandemic can be brought under control are yet to be seen.

"Further upside will be living on borrowed prosperity, and copper will need to find a solid chair while the music is still playing," said ING analyst Wenyu Yao.

(Reporting by Mai Nguyen in Singapore and Tom Daly in Beijing; editing by Richard Pullin)