Oil: Tossed between Riyadh's efforts and the economic outlook

Link copied
The summer period will not benefit the oil markets. The latter are struggling to follow a clear path and remain widely divided between fears of trade conflicts settling and the intensification of geopolitical tensions.

As such, the recent attack on an oil and gas installation on the Shaybah field, owned by Saudi Aramco, by Yemeni rebels, is reviving geopolitical friction in the region. Although this incident did not result in an interruption of production according to the Saudi national company, it must be noted that the multiplication of these skirmishes puts the region's crude oil exports at risk, especially since the Shaybah field constitutes just under 10% of the Saudi giant's total production.

At the same time, the market adjusts its risk appetite cursor according to the Sino-American trade negotiations, which are sometimes encouraging and sometimes postponed. It is not without recalling that these commercial negotiations more or less determine the guidelines in terms of oil demand. Not surprisingly, it remains at the centre of operators' concerns, whose morale is not at its highest given OPEC's surprising pessimism, which forecasts a new oil surplus in 2020.

In its last report, the cartel once again revised its forecast for growth in crude oil demand this year downwards due to a slowdown in global growth. However, there is no denying the Organization's efforts to support the courses. OPEC production fell again in July (to 29.6 mbpd) with an overall compliance rate of nearly 160%. As in previous months, Saudi Arabia is reducing its own extractions beyond its quota in order to be able to list its oil jewel, Saudi Aramco, on the stock exchange under the best market conditions. Despite many twists and turns and disappointments in what is described as the "IPO of the century", Ryad would aim for an initial public offering over the next two years. Proof of this is the oil giant's first disclosure of its profits for fiscal 2018, by far the highest in the world, at $111 billion.

In the United States, while the number of oil platforms is tending to decline, production is stabilizing at around 12 mbd, not far from the US record for crude oil production. In its latest report on the US energy outlook, the EIA still expects US production to reach a record level this year and in 2020, despite the financial difficulties faced by shale oil producers. In this context, US stocks are still in the upper range of their 5-year average 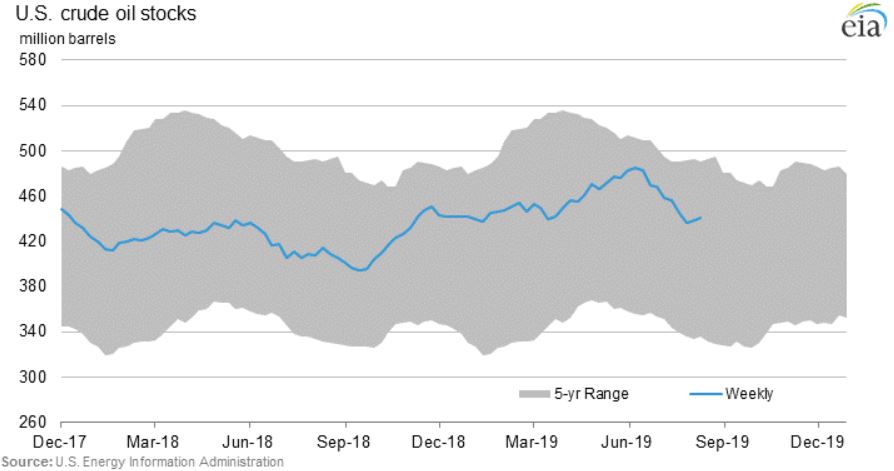 Evolution of US oil stocks - source: EIA
From a graphical point of view, in weekly time units, the trend is still downward, similar to the slope of the moving averages at 20 and 50 weeks. The configuration thus appears fragile as long as the next resistances block the technical rebounds. In this respect, it will be necessary to go beyond the 67 USD in order to resume a more positive trend. On the other hand, sellers will try to hold their short positions until the next major support located at 53 USD.