NEW YORK (Reuters) - The U.S. dollar edged lower across the board as traders showed a preference for riskier currencies on Tuesday, a day after worries over vaccine rollouts and the outlook for U.S. fiscal stimulus boosted demand for safe havens.

Mounting coronavirus cases and caution ahead of the conclusion of the U.S. Federal Reserve's policy meeting on Wednesday have dulled appetite for risk, lending support to the dollar against a basket of currencies in recent sessions. But investors were once again nibbling at riskier currencies on Tuesday.

The dollar appeared to be taking its cue from overall risk sentiment in the market, said Michael Brown, senior analyst at payments firm Caxton, in London.

"There is also probably a lack of appetite to be buying the dollar before what's likely to be another dovish Federal Open Market Committee (FOMC) meeting tomorrow," Brown said.

"Technicals are a little weak as well," he added, noting the dollar index's failure to break above the 90.50 level for long.

Few if any changes are expected in the Fed's policy statement on Wednesday after its two-day meeting and no new economic forecasts are scheduled for release.

Despite the dollar's recent rebound from multi-year lows, speculators in the currency market remain extremely bearish on the U.S. currency.

GRAPHIC: Down on the dollar 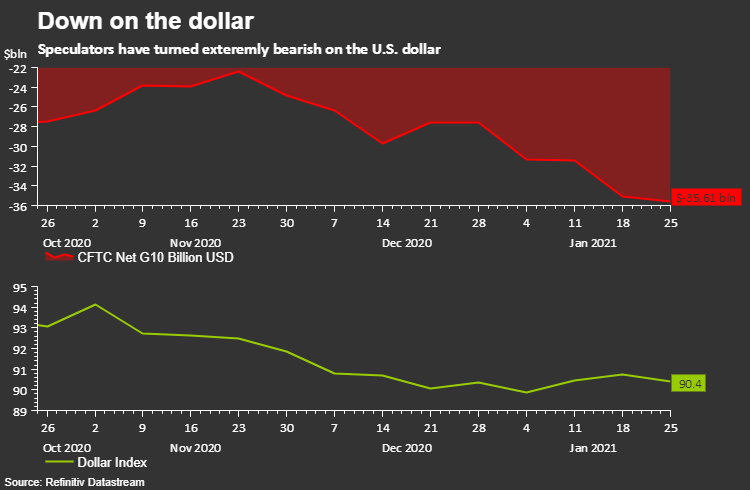 Traders are also keenly watching progress on the U.S. stimulus front after U.S. Senate Majority Leader Chuck Schumer said Democrats may try to pass much of President Joe Biden's $1.9 trillion spending package with a majority vote, but it is not clear if they have the numbers to override Republican objections.

The euro was higher on the day, but gains were muted amid early signals that the EU economy may not rebound as strongly this year as predicted. Germany's Ifo business climate indicator undershot expectations on Monday and an economic surprise index in Europe is near six-week lows.

The Australian dollar - seen as a liquid proxy for risk - was 0.52% higher against the dollar; the New Zealand dollar was up 0.61%.

The British pound was 0.46% higher, pulling away from a one-week low against the dollar as rekindled risk appetite in broader asset markets weakened the U.S. currency.