Dollar gains after weeks of losses as investors focus on U.S. aid package

The dollar rose on Monday, including against major currencies such as the euro and Swiss franc, as investors focused on the fiscal stimulus plan in the United States and U.S.-China tensions ahead of key trade talks this week.

The greenback rose to one-week highs against the euro and Swiss currency.

The dollar index also recouped some losses from July when it fell 4%. Friday's data on the non-farm payrolls report calmed fears about the U.S. labor market, but the dollar still posted its seventh straight weekly decline.

After talks in Washington over the next round of fiscal stimulus broke down, U.S. President Donald Trump signed executive orders on Saturday, partially restoring enhanced unemployment payments to millions of jobless Americans.

"We didn't get the deal done in Capitol Hill last week, but President Trump was able to sign those executive actions. So we're getting some stimulus, but not enough," said Ed Moya, senior market analyst at OANDA in New York.

"Right now, you'll probably going to see a little more consolidation this week of the big FX moves. But the longer-term outlook continues to be great on the euro, so you'll see people buying on dips," he added.

Shaun Osborne, chief FX strategist at Scotiabank in Toronto, said he believes the dollar will remain weak in the medium term but not collapse. He sees the possibility of a short-term correction or at least moderation.

"We think the fundamental backdrop that has provided support for the U.S. dollar in the past two years is turning more adverse and investors will continue to seek better economic prospects or returns in non-U.S. dollar markets in the coming months," Osborne wrote in his latest research note. 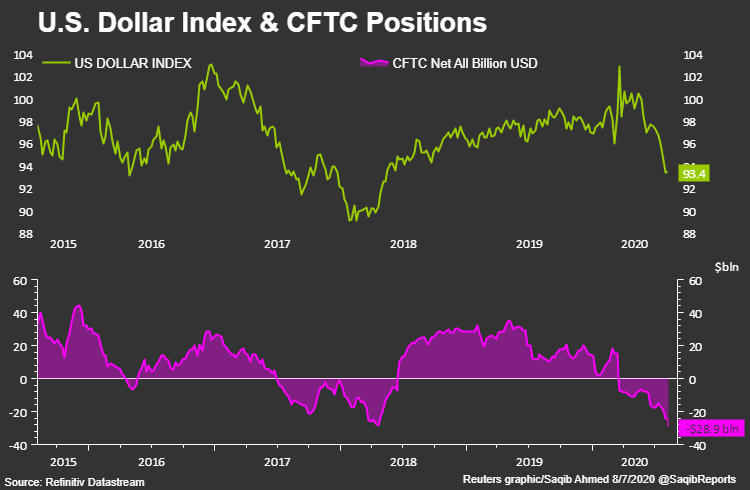 The dollar's strength at the end of last week was also due to escalating tensions between the United States and China, with the U.S. imposing sanctions on top Hong Kong and Chinese officials.

This continued to drive investors towards the safe-haven dollar on Monday. China imposed sanctions on 11 U.S. citizens, including legislators.

Senior U.S. and Chinese officials will meet via teleconference on Saturday to review the implementation of their Phase 1 trade deal and likely air mutual grievances.