LONDON (Reuters) - Global bets worth billions of dollars could be at risk as amateur share traders challenge the bearish positions of influential funds, inflating stock valuations and leaving the professionals looking at potentially hefty losses.

Gone are the days when bruised retail investors fled after prominent hedge funds bet against a stock -- the GameStop effect is rippling across U.S. markets and spreading to Europe.

Shares of the 20 small-cap Russell 2000 index companies with the biggest bearish bets against them have risen 60% on average so far this year, easily outperforming the rest of the market, a Reuters analysis of Refinitiv data shows.

Similarly, the best performers in Britain this week have been companies such as Pearson and Cineworld, in which investors also have sizeable short positions.

But share price surges such as the 700% year-to-date jump in U.S. video game retailer GameStop could potentially wipe out billions of dollars of those short bets.

Bets against GameStop alone amounted to more than $2.2 billion as of Monday, FIS' Analytics data showed, equivalent to more than a fifth of the company's market value.

However, the company's share price has quadrupled since the end of last week and added as much as 86% in early Wednesday trading to $276.

"Most of the short positions are funded on margins. And so when markets run against you, you are stopped out if you are a short seller," said Kaspar Hense, a fund manager at BlueBay Asset Management, which runs $60 billion in assets.

"A short position can exaggerate your losses if you are not actively managing your position."

Several traders have told Reuters that one of the reasons for the jump in the price of some shares is short-sellers buying back into the stock to cover potential losses -- the classic short-squeeze -- drawing in more retail investors hoping to ride the wave.

Retail investors account for an increasingly large share of market trading. Retail broker eToro told Reuters a third of its base joined in 2020 when trading on its platform surged five-fold from 2019 to $1.5 trillion.

Short sellers typically borrow stocks to sell with a view to buying them back later when the price falls. The premium they pay to borrow the shares reflects the demand for them.

All the GameStop shares that would be available to borrow are are already out on loan, with traders estimating annual borrowing costs at 25%-50% of the company's share price.

Short-seller Andrew Left, who runs Citron Research and is one of the big names behind the bets against GameStop, shorted the stock when it traded around $40, expecting it to halve in value. He still has a short bet although he has covered the majority of the position at a 100% loss.

Melvin Capital Management also closed out a short position against GameStop at a 100% loss.

GameStop is not the only short bet that has turned sour. BlackBerry, Bed Bath & Beyond, AMC, Macy's and Cinemark Holdings, have all risen anywhere between 100% to 250% so far this year.

In Europe, Evotec, Nokia and Varta have outperformed the wider market 2021.

Matthew Leibowitz, CEO of digital brokerage Stake said GameStop's performance is indicative of hedge funds being caught on the wrong side of a momentum rally.

While they might have a valid theory in shorting the stock, the retail frenzy whipping it to record highs will hurt them.

"You might have an amazing gun, but its no use if you've run out of bullets."

Refinitiv data on performance of some stocks with high short interest: 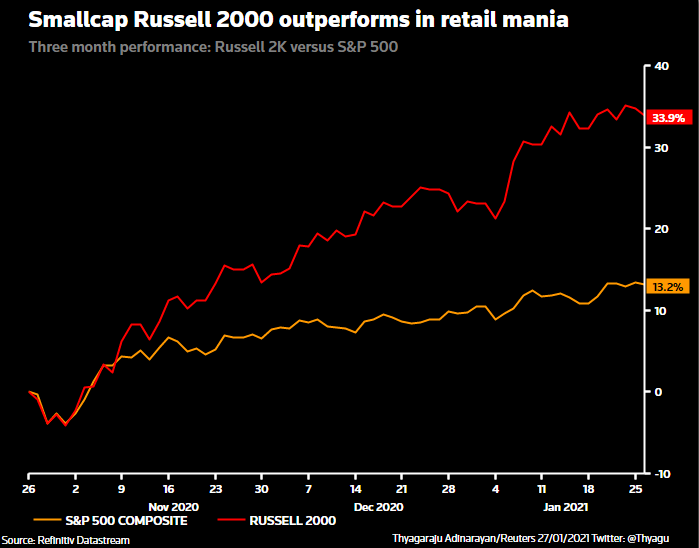 By Thyagaraju Adinarayan and Saikat Chatterjee