The U.S. dollar fell across the board on Tuesday as optimism about a potential coronavirus vaccine and a reopening world economy helped investors shrug off U.S.-China tensions, sapping demand for safe-haven assets.

The U.S. Dollar Currency Index <=USD>, which measures the greenback's strength against six other major currencies, traded down 0.75% at 98.99, after slipping as low as 98.891, its weakest since May 1.

The S&P 500 briefly rose above the 3,000 level for the first time since March 5, as U.S. biotech corporation Novavax Inc became the latest company to join the race to test coronavirus vaccine candidates on humans and enrolled its first participants.

"The reopening of the economy, along with positive news on the coronavirus vaccine front buoyed sentiment broadly," Ronald Simpson, managing director of global currency analysis at Action Economics, said in a note.

U.S.-China tensions have been simmering in the background as Washington repeatedly criticized Beijing's handling of the coronavirus outbreak, but investors have largely dismissed them.

On Tuesday, U.S. President Donald Trump's economic adviser said China's plan for national security legislation on Hong Kong was "a big mistake" and pledged Washington would pay expenses of U.S. companies that wanted to move out of the territory or China. 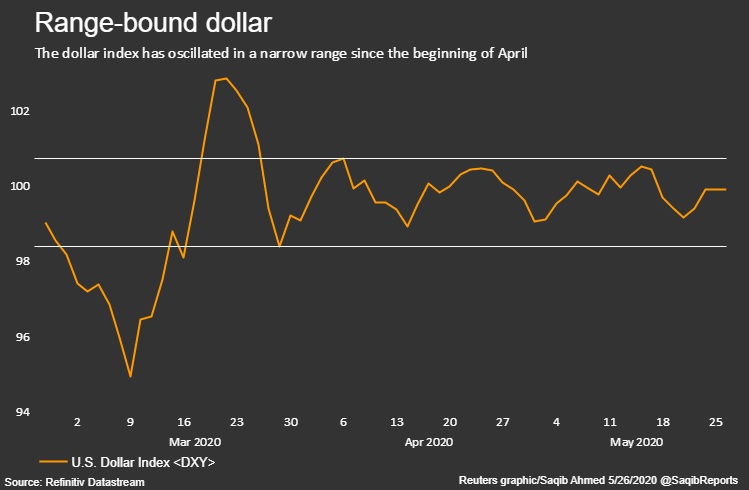 Data on Tuesday showed U.S. consumer confidence nudged up in May, suggesting the worst of the coronavirus-driven economic slump was potentially over as the country starts to reopen.

The dollar has remained in a narrow range since the end of March.

On Tuesday, the euro was 0.83% higher against the greenback after the Ifo institute said German exporters recovered somewhat in May from a "catastrophic" April.

The trade-sensitive Australian <AUD=D3> and New Zealand dollars <NZD=D3> and Norwegian crown <NOK=D3> each rose more than 1% versus the U.S. dollar.

The dollar was about flat on the day against the yen a day after Japan ended its state of emergency.