Link copied
Hopes of a future trade agreement between China and the United States should once again support the trend across the Atlantic, with the S&P500 index expected to rise by 0.35% in the early stages of trade.
The US index had ended up slightly up by 0.07% to 3077 points the day before, as a precautionary measure, information suggests that the "phase 1" agreement should not be signed before December.
Pékin and Washington would have nevertheless agreed to raise in stages, the additional taxes that the two countries have imposed on each other in recent months.

On the macro-economic level, weekly unemployment registrations will be published at 2:30 p.m. (215K consensus) and the consumption credit at 9 p.m.

Graphically, the trend remains positive in hourly data above 3066 points. Only the lowering of this level would militate for the beginning of a consolidation towards 3050/3038 points. Otherwise, the 3100 points could soon be reached 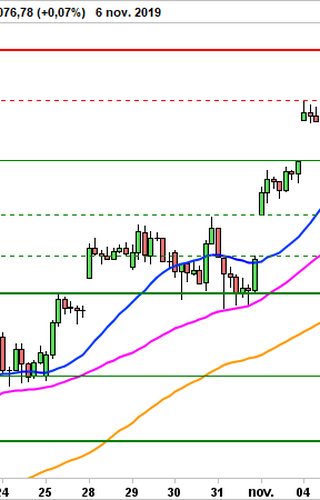