Towards a third consecutive session of decline

Link copied
Fears about the slowdown in the US economy weighed on Wall-Street yesterday once again, as operators reacted abruptly to the new contraction in manufacturing activity at the beginning of the week (ISM "47.8) for the second month in a row. Figures for the ADP survey have also declined, with only 135K jobs created compared to the expected 140K. Last month’s figure was also revised down from 195K to 157K.
The sanction was immediate, as was the S&P500, which ended up down sharply by 1.79% to 2887 points (-1.23% the day before).
The latter is still expected to decline by 0.3% in the first few trades, before some important statistics.

Weekly unemployment registrations (215K consensus) will be published at 14h30 then the Final PMI services index at 15h45 (50.9 consensus). The market will pay particular attention to the ISM services at 4pm, anticipated at 55.1 and to industrial orders, which are expected to fall by 0.5%.
The highlight of the week will be the monthly US employment report tomorrow. The consensus is based on an unemployment rate of 3.7%, 140K job creation and an hourly wage increase of 0.3%.


Graphically, the S&P500 maintains a negative dynamic below 2924 points, the lower bound of a gap opened yesterday. In the absence of a positive reaction in the 2878-point zone, one can expect a continuation of the movement towards 2861/2847 points, or even 2822 points per extension. 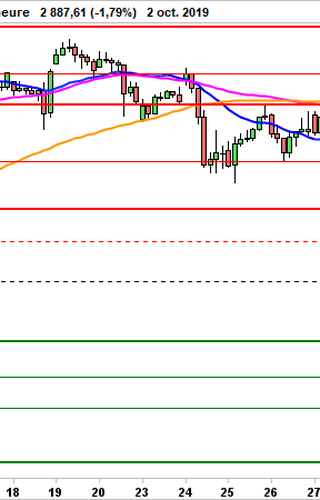