Link copied
Pending progress on the trade and voting front of the House of Commons in the United Kingdom for Brexit, the S&P500 index should open close to balance for this session of the three witches. The American index had closed slightly up by 0.28% to 2997 points yesterday, against the European current, despite statistics that were mostly below expectations.
The market could remain weighed down by the decline in Chinese growth to 6% from 6.2% previously, rekindling fears of a global economic slowdown.

No major statistics will be released today, except for the anticipated leading indicators at +0.1%.


Graphically, the S&P500 maintains a dynamic upward trend in hourly data above 2963 points. The dewatering of the 3006 points could allow the index to return to its historical records.
Only the sinking of the 2963 points would postpone this scenario, suggesting the beginning of a new consolidation phase towards 2948 points and then 2918 points. 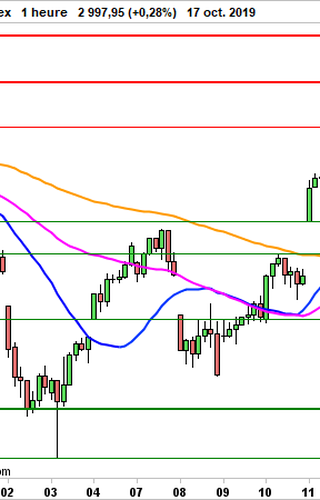