Reckitt dropped 8.4%, marking its worst day since February 2003, after missing sales growth estimates and warning on margins as costs rise and easing lockdowns slow demand for products such as Lysol disinfectants.

Other consumer staple stocks, including Imperial Brands, British American Tobacco and Associated British Foods, fell by between 0.1% and 1.1%.

"Investors are likely to be questioning the true defensive characteristics of these consumer goods companies," said Danni Hewson, financial analyst at AJ Bell.

"With consumers increasingly flocking to cheaper supermarket own-label products, the idea that the big brand owners are guaranteed sales success is no longer a given. Margin weakness only adds to the bear case for Reckitt."

The FTSE 100 has recovered nearly 26% since its October lows, when the country battled a deadly second wave of COVID-19 infections, amid support from dovish central bank policies.

However, the blue-chip index is still 12% away from its record high and has significantly underperformed its European and U.S. peers.

Meanwhile, Prime Minister Boris Johnson warned Britons should not get carried away by six days of better COVID-19 infection data, while one of the country's top epidemiologists said the bulk of the pandemic could be behind Britain in just a few months.

Among other stocks, British online greeting card publisher Moonpig tumbled 9.3% after it warned demand would slow in its new financial year as shops reopened.

Daily Mirror publisher Reach Plc gained 6.7% after it said it was trading ahead of expectations and that it expects the strong momentum to continue.

British transport company FirstGroup fell 0.2% after its Chief Executive Matthew Gregory said he planned to step down in September, a day after the company's biggest shareholder demanded his resignation. 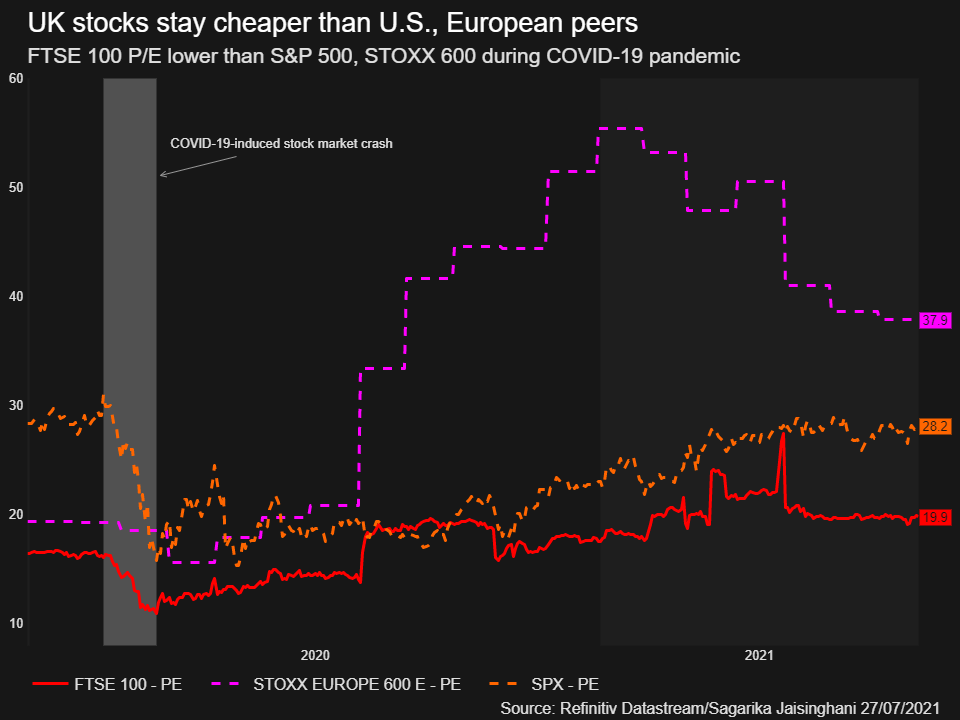 By Shashank Nayar and Amal S