European stocks back as favourites as economies re-open smoothly

European stocks are back to being favourites as the absence of a major second wave of coronavirus infections has helped ramp up re-opening plans, a boost to the region's economically sensitive cyclical sectors.

Risk assets across the world have rallied since March as governments and central banks announced unprecedented stimulus to ward off economic damage from lockdowns and gave a green light to opening economies in phases.

Europe has now recovered two-thirds of the losses incurred following the coronavirus outbreak. With equity funds attracting $6.2 billion (£4.91 billion) for the first time in eight weeks, the rally is seen solidifying further.

Bank of America analysts said on Friday they foresee European stocks rising another 10% by the end of September on expectation of a pick-up in business activity.

"While some economic activity will not come back anytime soon, the broad-based lifting of restrictions nonetheless implies scope for a marked pick-up in economic activity," BofA analysts said.

The bank has turned "overweight" on banks, expecting them to outperform the broader market by more than 30% by the end of the year. Bank stocks were one of the worst performers during the crisis, hitting record lows in March.

Within cyclicals, the auto sector has bounced back 63% from March, helping Germany's DAX to recoup most of its coronavirus losses. The index is just 8% away from setting a record high.

BofA is also "overweight" on mining stocks, seeing them benefiting the most from a turnaround of the economy. It sees euro area composite Purchasing Managers Index (PMI) new orders to rise to 53 in August and 58 in September, from 30 in May.

Asset manager Pictet, which manages $183 billion in assets, had a similar view and said it had raised exposure to "a number of cyclical sectors that have been hit particularly hard by the market sell-off".

"Prospects are looking brighter for the materials sector, which includes miners and chemicals firms. It is well-placed to benefit from the economic recovery emerging in China."

For a graphic on Europe lags YTD: 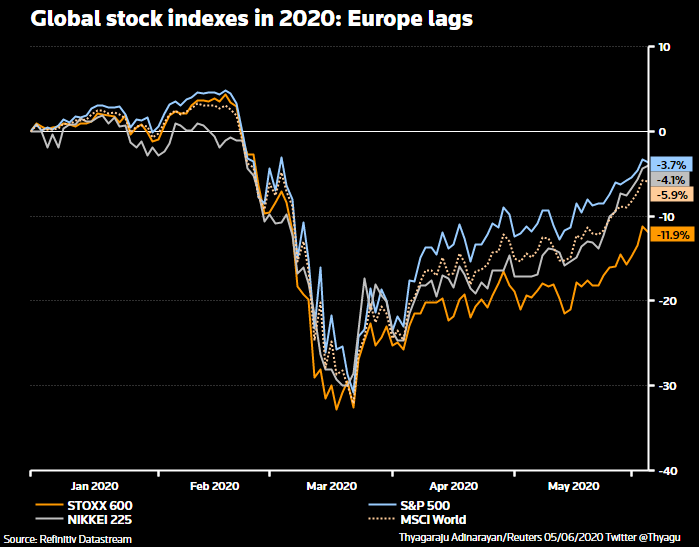