NEW YORK (Reuters) - The S&P 500 and the Dow closed modestly higher and Treasury yields reversed slight losses after the Federal Reserve, in minutes of its latest meeting, said that the economic recovery remains far from complete despite showing signs of progress.

"Today is noncommittal, not much going on, not much conviction one way or another," said Robert Pavlik, senior portfolio manager at Dakota Wealth in Fairfield, Connecticut. "We're in a wait-and-see period, in that transition between not a lot happening, just before earnings begin in a couple of weeks."

The U.S. Federal Reserve released the minutes from its most recent monetary policy meeting, in which the participants expressed caution about ongoing risks of the pandemic and reiterated the Fed's commitment to an accommodative stance until the rebound was more secure.

The minutes contained few surprises and appear to have been baked in to the markets.

"The Fed (minutes were) more of the same, it will be a while before we see changes in their policy decisions," Pavlik added. "You saw a little bit of a bounce in the markets but it's faded."

U.S. Treasury yields regained some ground after dipping following the release of the Fed minutes, which reinforced expectations that interest rates will remain near zero for some time.

The dollar slightly advanced against a basket of world currencies after oscillating for much of the session, rising in the wake of the Fed minutes release.

Crude oil prices rose on an improving global economic outlook, but were held in check by rising gasoline inventories.

Gold prices dipped as economic optimism drew investors away from the safe-haven metal in favor of riskier assets.

Graphic: How financial markets have performed over the last week 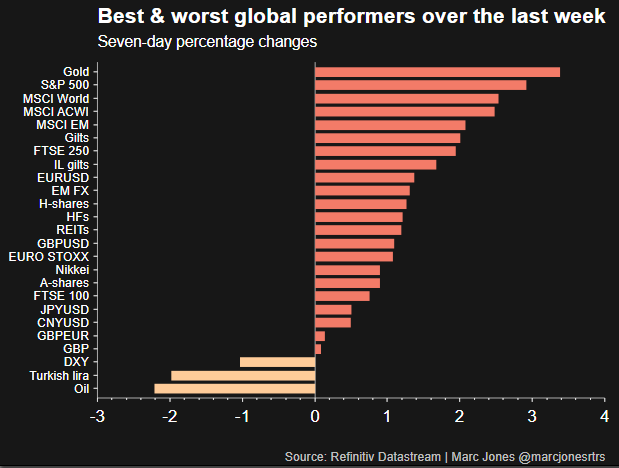