NEW YORK (Reuters) - The S&P 500 and the Dow notched record closing highs on Friday after solid U.S. inflation data and an uptick in Treasury yields suggested the economic recovery from the pandemic-related recession was gaining momentum.

"(It was) a fairly quiet Friday with low volume, a welcome change from 12 months ago," said David Carter, chief investment officer at Lenox Wealth Advisors in New York.

"Today was all about inflation," Carter added. "Despite today's higher PPI number, equity markets are starting to begrudgingly believe the Fed is in no rush to raise interest rates."

Transports, seen as a proxy for economic health, advanced for their 10th week in a row.

"Cyclical parts of the market like transports are being driven higher due to strong vaccination rates in the U.S., which suggests the economic reopening may accelerate," Carter said.

"Powell is not overly concerned about long-term inflation," said Ryan Detrick, senior market strategist at LPL Financial in Charlotte, North Carolina. "The Fed has stressed from the very beginning these increases will be transitory."

U.S. Treasury yields rose in the wake of the PPI report, which provided further evidence that the world's largest economy was on a stable road to recovery from the pandemic.

The dollar inched higher against a basket of world currencies as inflation data lifted bond yields, but the greenback had its softest week of the year due to better-than-expected economic data and the dovish Fed.

Graphic: Dollar set for worst week of the year 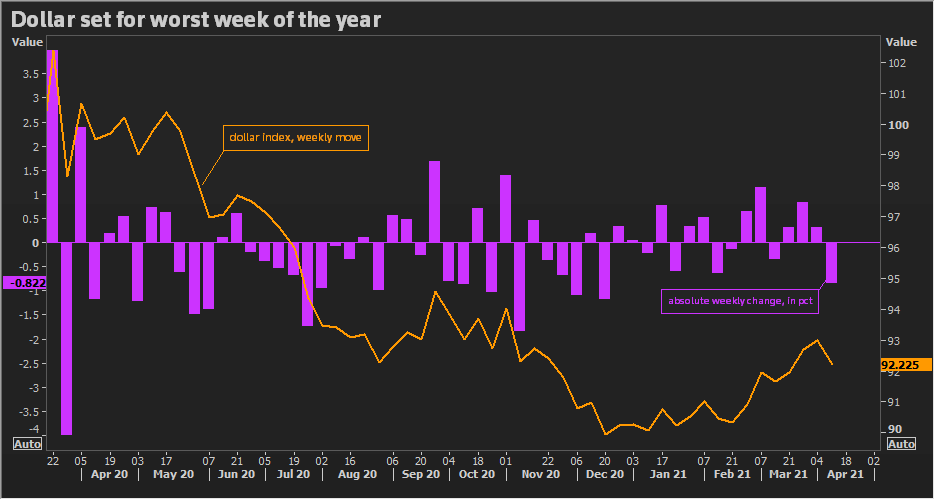 Crude oil prices dropped on rising supply amid a mixed picture on demand recovery from the COVID-19 slump.

Gold withdrew from Thursday's one-month peak, weighed down by a rebounding dollar and rising Treasury yields. Still, the safe-haven metal appears headed for its first weekly gain in three.

(Reporting by Stephen Culp; Editing by Will Dunham)