As with any class of financial assets, assessing the evolution of oil markets necessarily means knowing its specific features, but also its subtleties. The difference between Brent and WTI is small but significant enough to create important price disparities.

Brent, WTI, Dubai Light, what are the differences? For the sake of simplification, we tend to generalize the notion of "crude oil" to the point of implying that black gold is a homogeneous and identical raw material at all points throughout the world. But the reality is different. On the contrary, it would be more accurate to speak of “oils” in the plural given the diversity that exists in terms of quality.

No economic agent directly consumes crude oil. It must first be refined or transformed before being used or incorporated into our daily lives. The quality of an oil is assessed through two main criteria:

- Its sulphur content, expressed as a percentage. It is used to measure whether an oil is more or less corrosive. An oil can thus be described as sweet if its sulphur content does not exceed 0.5%. Otherwise, the oil is said to be sulphurous 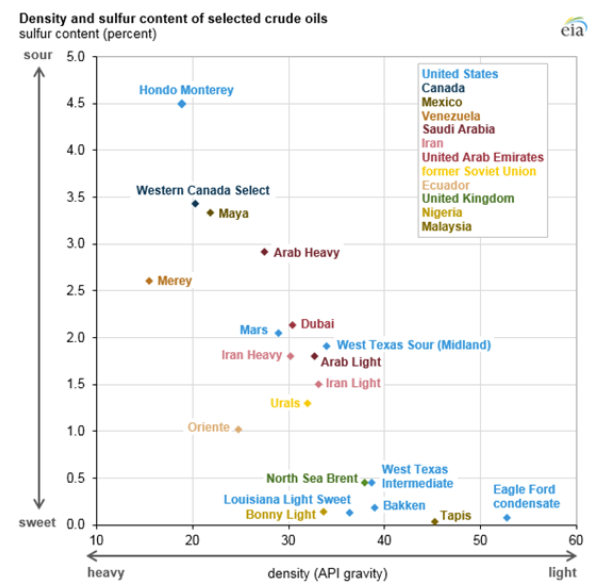 Example of different oils classified by API degree and sulphur content - source: Valero Energy
In light of these criteria, it is easy to distinguish hundreds of different qualities. It could even be argued that there is one per deposit. Within this great heterogeneity of quality, it is commonly accepted to take as a reference the Brent and WTI or Dubai Light, which are standards for establishing the price of oil in a given region. While Brent and WTI have similar quality characteristics, they nevertheless retain some specific features.

- WTI (or West Texas Intermediate), also known as Texas Light Sweet because of its properties (high API for very low sulphur content), is a light, non-sulphurized crude oil that is sent by pipeline to Cushing. Its storage location, located at the far end of Oklahoma, makes its transport and export costly in terms of logistics, so it is mainly refined on the national territory and destined for American consumption.

- Brent is also a light and sweet oil (important API for a low sulphur content). From various fields in the North Sea, the oil is delivered by pipeline to the Sullom Voe terminal in Shetland, Scotland, for refining mainly in Northern Europe. Nevertheless, due to the geographical position of its storage location, which has a deepwater port, large volumes are moved by tankers around the world, reinforcing its relevance as a global reference.

- Dubai Light is extracted from the Persian Gulf. This is a basket of crude oil from the Dubai, Oman or Abu Dhabi fields. It is a heavier oil but also much more sulphurous (average API of 31° for a high sulphur content).

Brent remains the reference for about two thirds of the oil traded worldwide, with WTI being the dominant reference in the United States and Dubai Light for the Asian market. 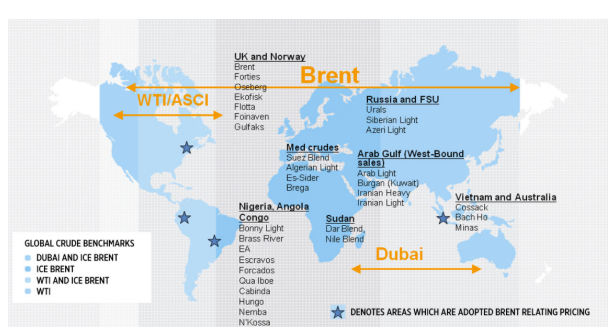 Use of references worldwide - source: Intercontinental Exchange (ICE)
How are oil prices formed? The example of the Brent - WTI spread

This plurality of quality implies a plurality of prices. As with all raw materials, oil meets the laws of supply and demand. To assess crude oil demand, a brief look at refiners is in order.

Without going into technical details, each refiner chooses his crude to be valued among the heavy and light references. Requiring more handling and energy, heavy crude oils have a higher refining cost than light crude oils. The same is true for sulphur crude. Sulphur is a pollutant that refiners must remove to comply with environmental requirements.

In addition, each category of crude oil (in terms of density and sulphur content) makes it possible to produce a set of refined products (or "product mix"), each with a different price and margin. In short, using low API heavy oils aims to produce more bitumen, residual fuel oil or other heavy fuels such as bunker fuel. On the contrary, sourcing high API oil (light oil) makes it possible to produce high-value light cuts such as gasoline, diesel or other distilled products. In other words, the quality of the oil used by a refinery determines the type of refined products it can produce.

In short, light and low-sulphur oils are the most coveted by refiners because they provide satisfactory "cracking spreads" (the difference between the price of crude oil and refined product). They are thus considered "superior" to heavy crude oil. This is why, in theory, light oils are more expensive than heavy oils, for which refiners obtain more attractive prices because the margins they allow are lower.

But how can we explain that the WTI barrel, although superior in quality to Brent, is cheaper to trade? Lighter and less sulphurous than its European counterpart, it should in theory be paid for with a premium. This was historically the case until 2011 when the WTI - Brent differential was on average positive. Other elements are also taken into account, in particular the offer and its location.

There is a word that is often associated with American oil, that of "shale". It is precisely its expansion, made possible by the modernisation of hydraulic fracturing processes, that partly explains the decline of WTI against Brent from 2011, where the differential reached a peak of USD 25.

Beyond the technical characteristics specific to shale oil production, which now places the United States among the world's leading producers of black gold, it is above all the quality of these unconventional oils that matters. American "shale oils" are very light and soft oils, they are thus equipped with a very high degree of API for a practically non-existent sulphur content (see the first figure for the references "Bakken" and "Eagle Ford").

However, unlike European refineries, the main American refineries were designed to process heavy oils. Prior to the development of U.S. shales, most of the shales processed medium and heavy oil from the Gulf of Mexico and Canada's oil sands respectively, blended with WTI to lower their average API supply. The massive influx of very light oil has therefore posed serious problems for the American market, which is not equipped to absorb this excess supply of light oil.

Adapting refineries to equip them with new equipment capable of upgrading very light oils is extremely expensive, pushing refining players to opt for short-term trade-offs. As such, one of the most natural solutions was to mix shale oil with very heavy oil (from Canada or imported from Venezuela). Nevertheless, problems of abundance quickly became apparent, as evidenced by the explosion of stocks in Cushing, where they jumped by nearly 80% between 2010 and 2016.

This problem prompted the American authorities to lift the ban on exporting American crude oil in December 2015. This historic decision, supported by the energy autonomy achieved by the country, aims to relieve the American market of its light oil towards European refineries, equipped to recover very light crude oil. The spread of the two global references has therefore narrowed significantly since then.

Outlook for the evolution of the Brent - WTI spread
Although it remains in Brent's favour, it is legitimate to wonder whether this gap is not bound to turn around again.

This question is all the more relevant that the Brent - WTI spread tends to reduce in the past few weeks. While this gap reached around $10 in May, it has now fallen to $4 over the last sessions of August.

To obtain elements of answers, let us repeat the previous reasoning. The causes of the decline in WTI relative to Brent are due to an excess of light crude oil on the US market and the inability of US refineries to refine it. On this basis, a change in polarity can only be imaginable if the United States has the capacity to export this light oil on a massive scale (assuming that oil demand will remain strong) and/or if American refineries equip themselves to develop shale oil. What is the situation?

Modernizing American refineries to use very light oil quality requires very expensive equipment. These investments amount to several billion dollars for equipment that requires years of construction before it can be operational. This makes it difficult to envisage a major structural change in the US refineries. Nevertheless, it must be said that more and more players are following this path, such as Total, which is acquiring a steam cracker for the $1.7 billion deal that will strengthen the Port Arthur refinery. The commissioning of this new unit is planned for next year. Exxon Mobil has announced its intention to adopt a multi-billion dollar plan to double its light crude oil refining capacity in the United States, a $9 billion plan over eight years. As a result, the average API of oils used by U.S. refiners has been steadily increasing since 2010.

Average crude oil density used by U.S. refineries, expressed in API - source EIA
This is a real structural disruption facing American refiners, since they cannot be profitable using only light oil (we have seen that historically, American refiners are equipped to process heavy oil). In this context and in general terms, the United States imports massively heavy oil, mainly from the Canadian oil sands, in order to cut it with light oil (see graph below).

Imported and produced crude oil, classified by density category (API) - source: EIA
In the meantime, the American market must be relieved of the burden of light oil that does not find a buyer on national territory. Exporting thus appears to be the only solution to the various saturation problems. However, a massive increase in exports must necessarily be accompanied by iron logistics, the aim being to have oil that is competitive for export. This means having oil terminals that can accommodate mega-tankers capable of shipping 2 million barrels, called VLCCs (the aim is to achieve significant economies of scale).

It is for this reason that the Louisiana offshore oil port has been modernized in order to be able to serve these supertankers, a first for the United States. Similarly, other terminals should soon be able to do the same, such as the port of Corpus Christi in Texas, which, after carrying out its first VLCC test in 2018, is multiplying its projects to compete with the Houston port facilities and accommodate large crude oil carriers.

While the coast desperately needs more capacity to cope with the expected increase in US exports, it also requires additional infrastructure resources to move crude oil to these terminals. New pipelines have been created to transport more oil to export sites. In this context, the EPIC pipeline has joined Cactus II on the list of recently operational infrastructures that transport crude oil from the Permian basin to the coast. These real oil arteries have a transport capacity of 400,000 barrels/day (b/d) and 670,000 b/d respectively. In addition, the Gray Dak pipeline is expected to be commissioned by the end of the year, which, with its 900,000 b/d capacity, will bring nearly 2 mbd of additional Texas oil to the coast, which will relieve congestion in the US market. 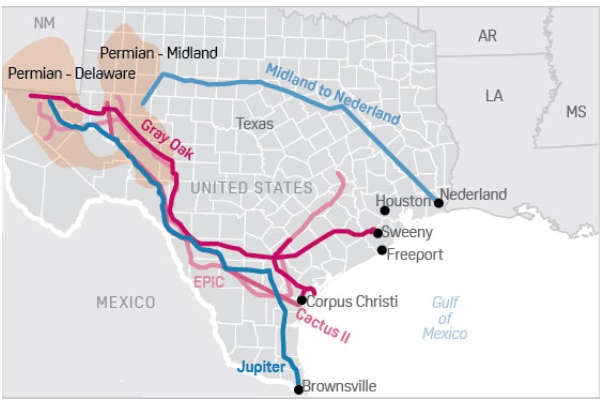 Mapping of pipelines linking the Permian Basin to the Gulf of Mexico - source: S&P Global Platts
These logistical efforts have resulted in a better competitiveness of American export references, ultimately leading to a contraction in the Brent - WTI spread. The trend thus clearly remains towards conquering market shares abroad, as evidenced by the sharp increase in US crude oil exports, which approached the 3 mbpd mark last May.

Dynamics of US crude oil exports, by country - source: EIA
This trend could increase given the EIA's forecasts, which regularly revise upwards its forecasts for US production in its monthly notes (Short-Term Energy Outlook). In the January 2019 ASEO, the EIA projected that U.S. crude oil production would average 12.1 mbpd in 2019 and 12.9 mbpd in 2020, significantly increased in the July 2019 ASEO, where the Agency revised U.S. production to 12.4 mbpd for 2019 and 13.3 mbpd in 2020.

Nevertheless, it is important to note a number of obstacles that can arise simultaneously and undermine the contraction of this spread: