Gold pushed further past $2,000 an ounce on Wednesday in the face of a weak dollar and expectations of more stimulus measures for the pandemic-ravaged global economy, while stocks in Europe and on Wall Street rallied on encouraging corporate earnings.

Oil prices rose to their highest since early March on a big drop in U.S. crude inventories and on the weak dollar, which was pushed lower by data showing euro zone business activity returned to modest growth in July.

Gold set a new record after scaling $2,000 for the first time on Tuesday, as investors seek a store of value on fears government stimulus in response to the pandemic will trigger inflation, devalue other assets and keep bond yields low.

The dollar standard of the past 50 years is being openly questioned because of the U.S. Federal Reserve's enormous increase in money supply, said Ryan Giannotto, director of research at alternative ETF provider GraniteShares.

"The dollar is collapsing under the weight of $3 trillion in printed dollars, this all comes out in the wash with higher gold prices," Giannotto said.

Gold has gained nearly 35% so far in 2020 and is one of the year's best-performing assets. 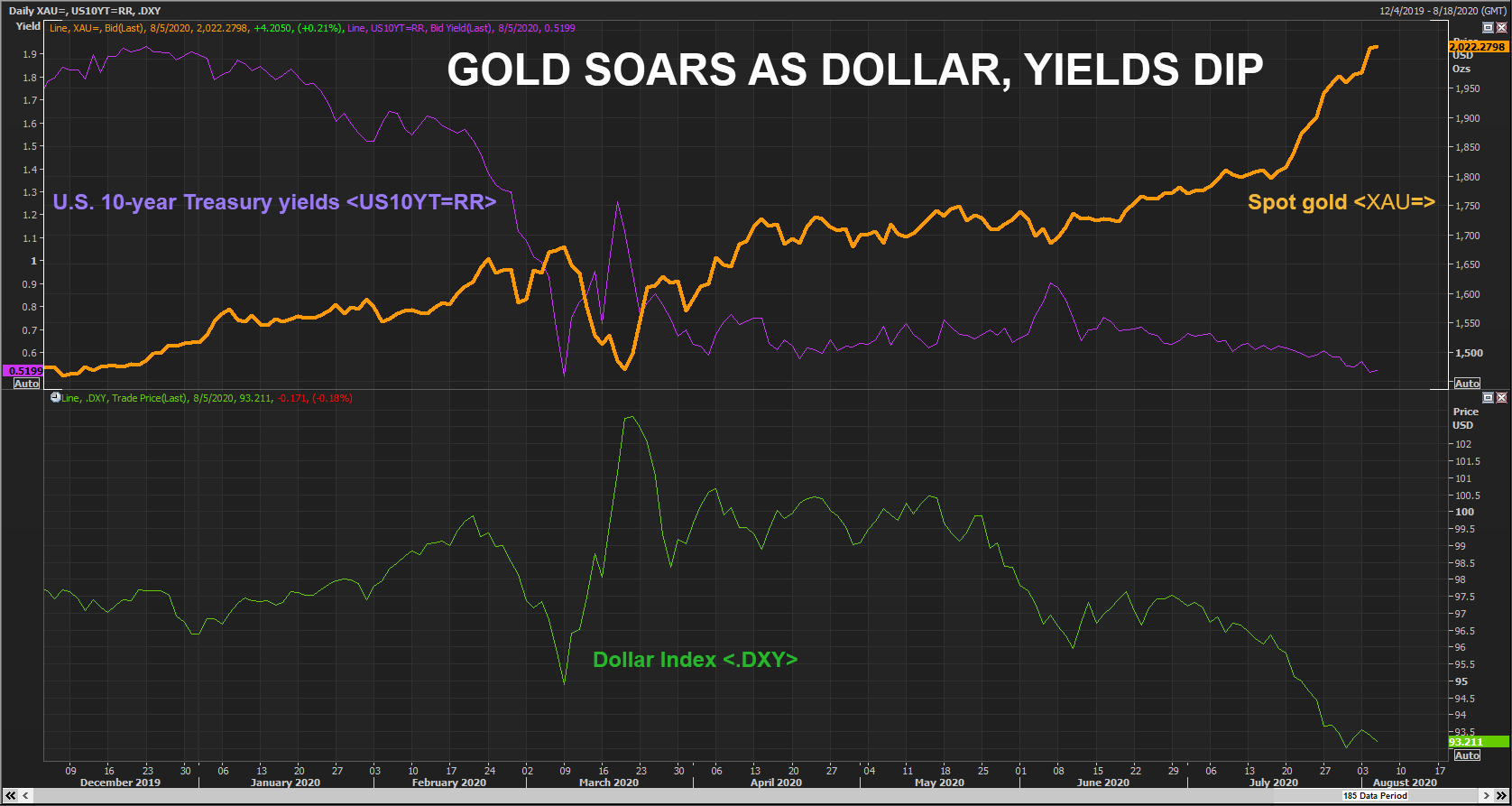 Concerns that the U.S. economy is stalling amid a surge in coronavirus cases has increased calls for more fiscal aid, a move stock investors have welcomed.

Officials drew lines in the sand after more than a week of discussions about a new round of coronavirus relief. A leading White House negotiator in talks with congressional Democrats and some Senate Republicans said they viewed Friday as the deadline to reach a deal or drop talks.

A surprise quarterly profit from Walt Disney Co and a slate of upbeat results from healthcare companies lifted sentiment on Wall Street, while European shares rose on a slate of positive results. Disney shares jumped 8.8%.

In Europe, the broad FTSEurofirst 300 index <.FTEU3> closed up 0.3% at 1,417.05. London-listed mining groups Rio Tinto, BHP Group and Glencore provided the biggest boost, lifting the broader mining index up 4.0% on the back of stronger metal prices. [MET/L][GOL/]

The dollar extended losses after U.S. private payrolls growth slowed sharply in July, pointing to a loss of momentum in the labor market and overall economic recovery as new COVID-19 infections spread across the United States.

The Japanese yen strengthened 0.1% versus the greenback at 105.61 per dollar.

The U.S. government bond yield curve steepened as the prospect of increased supply in longer-dated debt dampened prices following the Treasury Department's announcement that it would borrow more this quarter than previously anticipated.