LONDON (Reuters) - Europe's pile of negative-yielding government bonds is at its highest ever and looks set to grow as borrowing costs even in highly-indebted southern Europe head for sub-zero terrain as an unprecedented health crisis ravages the economy.

Refinitiv data shows entire yield curves in Germany, the Netherlands and Finland once again below zero, meaning investors must pay those governments to hold their debt.

What was seen in 2014 as a temporary side effect of unorthodox monetary policy, now seems firmly entrenched, given a growing belief that central bank stimulus will be in place long after a vaccine against the coronavirus is rolled out.

Graphic: Euro zone sovereign bond yield heatmap - https://fingfx.thomsonreuters.com/gfx/mkt/gjnvwbldbpw/heatmap1911.PNG Since the European Central Bank flagged last month that it would expand its bond-buying programme in December, yields on greater swathes of southern European bonds have sunk below 0%.

And at -0.50% the ECB's deposit rate is already among the lowest in the world.

"What I think is key there is the negative depo rate, what the market is reflecting is that the ECB will keep the depo rate in negative territory for some time," said Gilles Moec, chief economist at Axa Investment Managers.

In southern Europe, Portugal's 10-year bond yield fell to a record low of 0.038% on Wednesday, just a whisker away from the 0% barrier. Graphic: Spain and Portugal head for 0% - 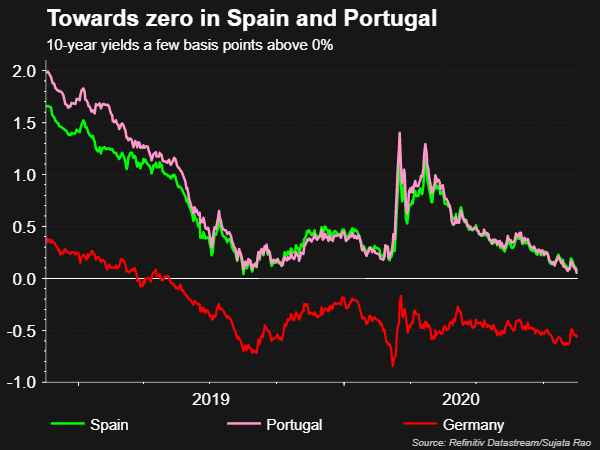 Spanish and Portuguese 10-year bonds yields have fallen 40 bps each this year as investors pile into the remaining positive yielding bonds in Europe.

Even in Italy, where the debt-to-GDP ratio is one of highest in the euro bloc, five-year borrowing costs are negative, dipping below zero after the ECB's October meeting.

At the start of the year, just before COVID-19 took hold in Europe, only Italian bonds with maturities of two years or less had negative yields.

Any sign the Bank of England will cut official rates below 0% is likely to push five-year gilt yields back below the line, leaving Greece as one of the only European markets with positive yields in that area of the curve https://graphics.reuters.com/GLOBAL-BONDS/YIELDS/xklvybmrapg/index.html.