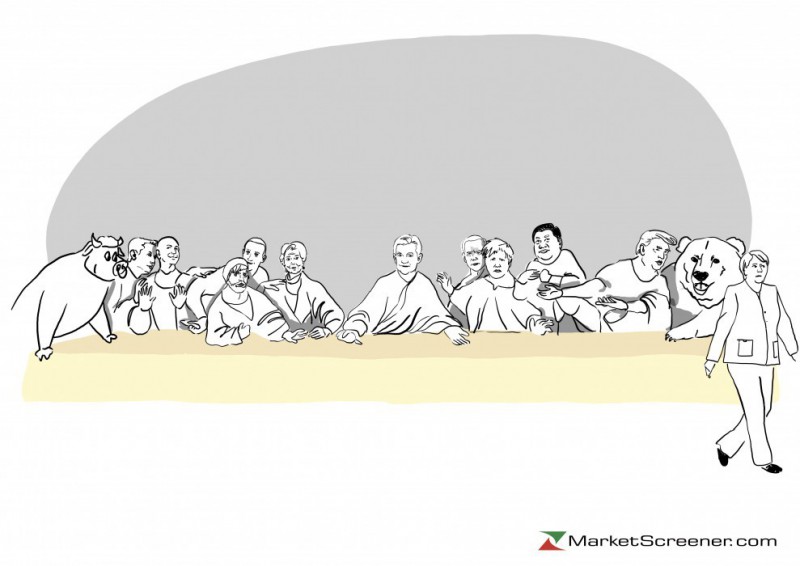 Space race, inflation, blockchain, tapering, metaverse, Omicron and its consorts, among others, have ignited the debates between these political-economic personalities in 2021. Leonardo da Vinci would have had a hard time if we had the honor of having him here today... Who knows, maybe he would have wanted to turn his mural of the year's personalities into a digital work in the age of the blockchain. Come on, let's sit down for this last dinner of the year.

The whimsical and divisive Tesla boss Elon Musk will be able to pop the champagne. He's throwing satellites into orbit and dreams of mining Mars while straddling the Earth. Genius? Brain-computer? Industrialist? Each of us will be able to label him as we wish, but the man with 66 million followers on Twitter can boast of having been selected as the "Person of the Year" by the famous Time Magazine. Mr. Musk will have made his mark in 2021, and doesn't intend to stop there for 2022, both for imposing his car manufacturer brand around the world and for his ambition of space conquest. But for this second ambition, the billionaire will have to deal with his American sidekick, the delivery champion.

Jeff Bezos, for his part, doesn't see us lasting long on Earth, believing that our beautiful planet could one day become a holiday destination just like our national parks. Bezos dreams of floating space cities where our children will be born. A human utopia that will embark our dreams (or nightmares) "in a galaxy far, far away ..." The billionaire did not indicate if Amazon would deliver between floating cities. To be continued...

Meta boss Mark Zuckerberg is keeping his feet on the ground, but with a virtual reality headset. Steven Spielberg should watch out, Ready Player One should come to life, in "real life". The promise of a daily life on the border between the real and the virtual, but which at least has the merit of wanting to leave us on our planet unlike his companions Musk and Bezos. A digital utopia that seems far away. We let you place the cursor between anxiety and excitement. Another boss of a web giant has decided, like Zuckerberg, to change the name of his company.

Jack Dorsey has decided to change the name of his digital payment company "Square" to "Block". The cryptosphere has taken a positive view of this rebranding, which makes Mr.Dorsey's desire to be a leading player in the digital assets sector shine through a little more. The American man is well known for his interest in cryptocurrencies and the blockchain technology that powers them. After auctioning off his first tweet as an NFT for nearly $3 million or appearing at the House Disinformation hearing with a Bitcoin clock in the background, the tone was set. A technological revolution not seen in such a positive light by the world's political and economic class, which has had to deal with pandemics, inflation and tapering in the meantime.

In Berlin, Angela Merkel gave up her seat to Olaf Scholz as German Chancellor after 16 years in power. The former chancellor has gone the way of the English by not topping this year's list of the world's most influential women. Boris Johnson can't boast of doing any better... The British prime minister may not be part of the global political scene soon, being once again at the heart of a financial scandal. "The Guardian" published a snapshot of Boris Johnson drinking alcohol at a festive gathering of about 15 people in the garden of his Downing Street residence in the midst of a 2020 pandemic. A popularity rating at half mast. A darkening future for BoJo. Nevertheless, between Joe Biden's United States and Xi Jinping's China, it's no fun either.

Human rights, Taiwan, the "unfair" trade war, the 2022 Olympics... The two heads of state discussed a number of issues during their chat last month. An exchange that finally settled nothing of their disputes. If after the arrival in office of Joe Biden in January, the tone has changed compared to the ardor and animosity of his predecessor Donald Trump, relations still remain very tense between Washington and Beijing. The former US president, meanwhile, while waiting for the next election in 2024, has decided to devote himself to his social network "Truth Social", presented as "an alternative to resist the tyranny of the tech giants" across the Atlantic. His banishment from Twitter, Facebook and Youtube after his supporters stormed the Capitol on January 6, prompted him to give birth to his own social network. The foundations of his eventual candidacy for the White House will perhaps be laid through this alternative.

Finally, the duel between the bears and the bulls has largely turned in favor of the bulls this year. Stock market indices have largely smashed their all-time highs, bringing with them record gains for investors. The end of the year, against the backdrop of the Omicron variant and runaway inflation, has been a little more nervous than the rest of the year in the markets. If we step back, we can see how far we've come since the Covid crash of 2020. Now we'll see if the bears will get back in the game in 2022, or if they'll once again be pushed back into the fray.

This has been a year full of emotions and tensions across markets. An atmosphere that will most likely spill over into 2022. If this Last Supper really does take place, we can bet that it will not only be the champagne that will be poured... See you next year for a new Last Supper.