Global equities slid and the dollar firmed on Wednesday after the Federal Reserve pledged to hold interest rates near zero until at least 2023 and keep its bond-buying program in place to stimulate the U.S. economy as part of a dovish policy stance.

The S&P 500 and Nasdaq ended a choppy session lower as losses in heavyweight technology names such as Amazon.com and Apple weighed on the market and drove down MSCI's U.S.-centric benchmark index for stock performance around the world.

Longer-term U.S. Treasury yields and gold prices edged higher after the Fed promised to keep rates on hold until inflation is on track to "moderately exceed" the U.S. central bank's 2% inflation target "for some time."

"They want to be dovish. They want to be super dovish. The market is priced for dovish," said Nancy Davis, managing partner and chief investment officer at Quadratic Capital Management LLC in Greenwich, Connecticut.

"Nobody thinks there's going to be any kind of inflation at all and the guidance is more dovish and in line with what the market expected," Davis said, adding that she believes there is a danger inflation could exceed expectations.

New economic projections released with the Fed's policy statement showed rates on hold through at least 2023, with inflation never breaching 2% over that time. Policymakers saw the economy shrinking 3.7% this year, far less steep than the 6.5% decline forecast in June. Unemployment, which registered 8.4% in August, was seen falling to 7.6% by the end of the year.

Last month, the U.S. central bank adopted a new approach to inflation and unemployment that will allow the economy to run a little hotter than in the past to help ensure job growth for lower-income earners.

Phil Orlando, chief equity strategist at Federated Investors in New York, said short-covering or some other hedging may have forced stocks lower at day's end, and the market could easily bounce back by Friday.

"The market has this weird response mechanism around Fed meetings all the time, regardless of who the chairman is," he said. "I watched the press conference, I watched the Q&A; I thought what (Fed Chair Jerome Powell) said was fine."

European retail stocks surged on strong results from Zara-owner Inditex after it said there was a progressive return to normality, with online sales growing sharply and store sales recovering. Shares of the Spanish retailer jumped 8.1%.

When the pandemic slowed economic growth, consumers were in a relatively strong financial condition, the direct opposite of what is normally the case for an economic downturn, he said.

The yen rose overnight and extended gains that hit a nearly seven-week high of 104.995 to the dollar as investors sought safer assets.

The Japanese yen strengthened 0.41% versus the greenback at 104.97 per dollar.

For a graphic on World stocks: 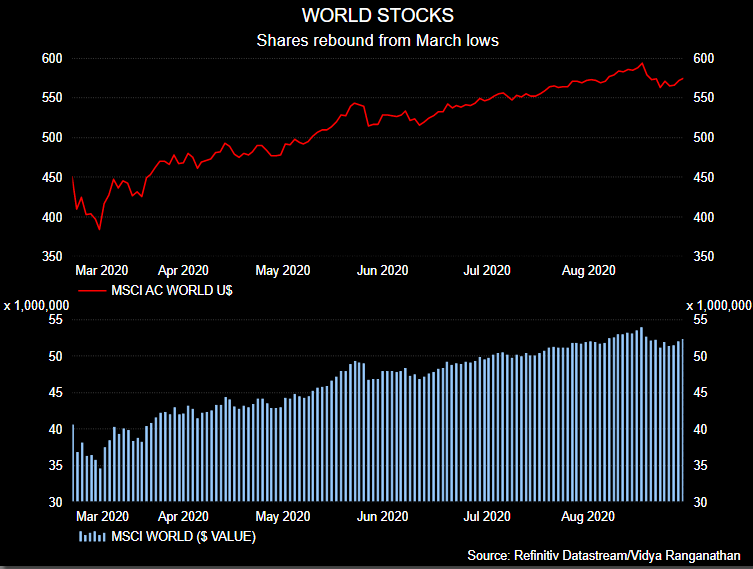