The greenback is recovering against most major currencies as expectations of a decline in FED rates stabilize and the outlook for the global economy darkens.


While a large majority of investors still expect the Federal Reserve to relax its policy in July, less than a quarter of them expect such action to take place at this week's meeting. Jerome Powell's quarterly press conference will nevertheless be particularly watched by the markets on Wednesday, although the American central bank usually changes its key rate in advance of this event, and not at an intermediate meeting.

At the same time, trade disputes are intensifying and Washington is asking Beijing to control its exchange rate as the Chinese currency gradually slips towards the 7 yuan to 1 dollar threshold. But PBoC President Yi Gang considers that this level is not more important than any other.

In addition, there are new geopolitical tensions involving Iran, following attacks in the Arabian Sea against Norwegian and Japanese tankers, which also penalize risky assets to the detriment of safe havens.

On the macro side, China is taking a hit and publishing industrial production at its lowest score in 17 years. In the United States, US consumer prices rose by only +1.8% year-on-year in May, compared to +2.0% in the previous month, but retail sales, the main indicator of consumption in the world's leading economy, held up well (+0.5% month-on-month).

In Europe, Mario Draghi took advantage of the ECB's annual seminar to open the door to a new rate cut, immediately triggering Donald Trump's anger, which evokes an "unfair advantage". A bloodbath that comes at a time when the White House resident has been putting pressure on the FED's leaders for several months to force them to adopt a more accommodating policy to support Uncle Sam's trade balance.

In the United Kingdom, six candidates are still in the running to succeed Theresa May as Prime Minister, including favorite Boris Johnson, a well-known Eurosceptic who campaigned for Brexit. Regularly raising the specter of a no deal, he promises to exclude any further postponement of the country's exit beyond October 31. Following a series of votes by Tories MPs, the 160k members of the Conservative Party will be responsible for deciding between the finalists. The winner's name should be known by the end of July.

Meanwhile, in Switzerland, the SNB maintains that the level of the Swiss franc is high and that the situation remains fragile. The Swiss central bank believes that a negative interest rate (currently -0.75%) and foreign exchange market interventions remain necessary to reduce upward pressure on its currency.

Monetary policy will be in the spotlight these days with the FED on Wednesday and the Bank of Japan and then the Bank of England on Thursday. European PMI indicators will close on Friday.

Graphically, the Euro had offered sellers good intervention timing and is now back at the heart of its bearish corridor: USD 1.1130 and USD 1.10 are our next price targets.

For its part, the British pound is plunging towards its annual lows and could, if it crosses USD 1.2492 at the daily close, reach USD 1.23, a threshold not seen since March 2017. The Pound could nevertheless react to a shortage of sellers by offering itself a technical rebound against the Euro, and the EUR/GBP pair could retrace towards GBP 0.8850 or even GBP 0.8770. 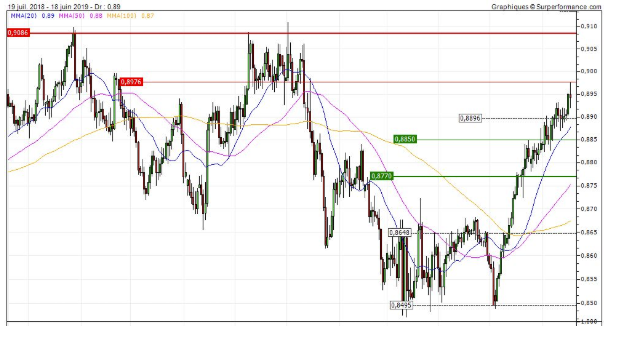 After having once again expressed its vigilance regarding the high cost of its currency, the SNB confirms that it represents a valuable firewall against the excessive increases in the Swiss franc. Despite a climate favorable to risk aversion, we are therefore EUR/CHF buyers under 1.12 with CHF 1.1302 and CHF 1.1450 in the sights.

Finally, 108 remains a key threshold on the USD/JPY pair. Below this level, regularly threatened by various catalysts (trade conflict, EDF,...), prices would open the way to an acceleration towards JPY 107.