LONDON (Reuters) - Some of the world's top economies could see their credit ratings cut or put on downgrade warnings in the coming months in a second global wave of coronavirus-related revisions, S&P Global's top sovereign analyst has warned.

S&P's sovereign group managing director Roberto Sifon-Arevalo told Reuters that the immense costs of supporting health systems, firms and workers through the pandemic was fundamentally altering some countries' finances for the worse.

The rating agency has already downgraded or cut the outlooks on nearly 60 countries this year, but only relatively few have been higher-rated richer nations.

With some though piling on 15-20 points of debt as a percentage of gross domestic product (GDP) - amounts that would normally take four or five years to accumulate - and locked into higher spending for the next 3-5 years, that could be about to change.

"You are talking about ratings in the EU, or in highly developed countries like Japan or the UK or in this part of the world, the United States, that have been able to implement pretty massive fiscal and monetary packages to defend themselves," Sifon-Arevalo said.

A total of 31 countries - almost a quarter of all those S&P rates - currently have "negative outlooks" on their ratings which more often than not get converted into downgrades.

Of the bigger economies it includes Australia's prized triple-A rating, Italy and Mexico's BBB scores and Spain's A grade. However, a blizzard of new negative outlooks could be just as much of a worry at time when many major economies are seeing a resurgence of the virus.

"We are going through the revisions. Now, and over the next few months we will continue to do so," Sifon-Arevalo said.

"I would say initially it's going to be an outlook change. And again, there's going to be those that maybe will come out of that and will come back to stable (outlooks) in a couple of years."

"But then there will be those that will not come back to stable and they will keep going down the rating spectrum."

There are two more groups of less well-off countries whose rating are also in the firing line.

In Latin America, Mexico and Brazil are under pressure as well as Colombia which is teetering on the last rung of investment grade and on a warning it could be cut to junk.

The final group includes some of the world's poorest and most indebted countries in sub-Saharan Africa, where Sifon-Arevalo said more debt restructuring and defaults could be coming.

Zambia has already asked its international creditors to give it more time to pay some of its debts which have ballooned to 100% of its GDP, while countries like Angola and Ghana are spending roughly half of their government revenues just on making interest payments on their debts.

"I think we are likely to see more cases like Zambia's," he said. "You can imagine that spending 50 cents out of every dollar or peso or whatever currency you're earning, just on paying interest it's becoming pretty difficult." 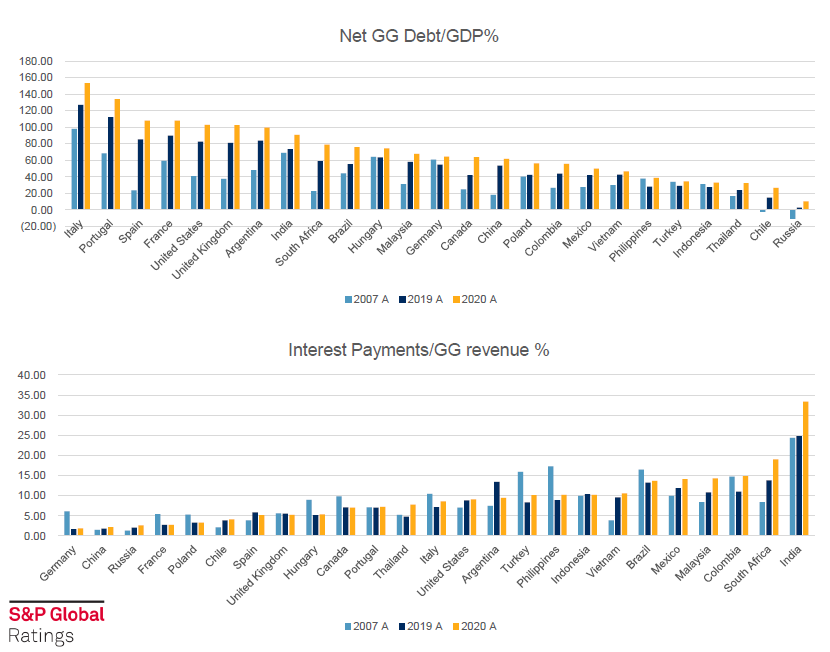