The euro edged higher, toyed with a bigger gain and then fell back after the European Central kept its interest rate policy intact and left questions about how it will withdraw stimulus when the economy recovers.

The euro was up on the day about 0.1% against the U.S. dollar when the central bank posted its statement, and briefly doubled as ECB chief Christine Lagarde spoke afterward citing "signs of improvement" under clouds of economic uncertainty, before slipping back.

Axel Merk, chief investment officer at Merk Investments in Palo Alto, California, said markets vacillated over what Lagarde was revealing about the timing of interest rate hikes when she said that the ECB would like to pace its moves with those of the U.S. central bank but that two economies have different inflation trajectories.

In the end, Merk said, "there was no big substance there."

The back-and-forth of the currencies on Thursday was another example of how markets have been preoccupied with sorting out how quickly different economies will rebound from the pandemic and how their interest rates will fluctuate.

On Wednesday the Canadian dollar rose sharply after the Bank of Canada signalled rate hikes next year and said it was pulling back on asset purchases. The announcement marked the first Group of Seven central bank to move towards withdrawing stimulus.

Now markets are looking toward next week's meeting of the U.S. Federal Reserve and possible comments about how it views future changes in its easy monetary policy.

After the ECB comments, euro zone bond yields edged higher while yields on 10-year U.S. Treasuries were little changed at 1.56% despite a report from the government that U.S. weekly jobless claims declined further, strengthening expectations for blockbuster U.S. job growth in April. 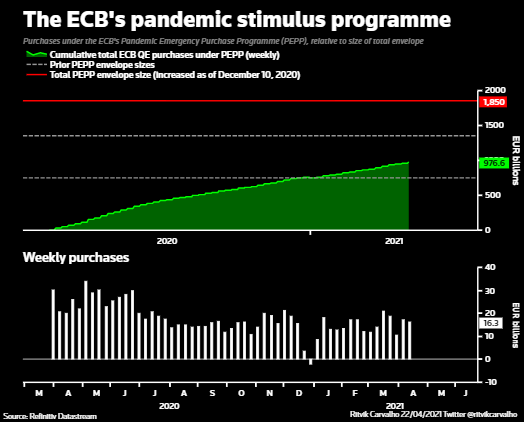 Sentiment toward the dollar has weakened much of this month after a March spike in Treasury yields reversed course. But some analysts say the outlook over the longer term remains positive due to a strong U.S. economy and more coronavirus vaccinations.

Merk said, "Ultimately what matters is the progress with the pandemic" and what that means for a global recovery, inflation and interest rates.

By David Henry and Ritvik Carvalho