Deezer wants to play in the big leagues 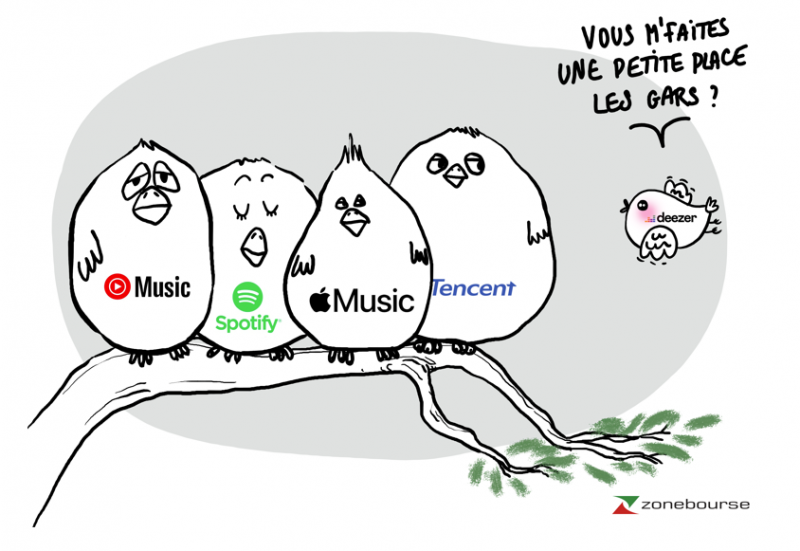 Second attempt for the small French music streaming company. Deezer has announced that it will retry its IPO, 7 years after abandoning the first attempt due to unfavorable market conditions. If the IPO should this time be facilitated by the SPAC I2PO (supported by big names : Artemis, the holding of François Pinault's family, the business banker Matthieu Pigasse and Iris Knobloch, the ex-boss of WarnerMedia), the streaming company will face a strong competition.

According to MIDiA, by 2021, the number of global subscribers to music platforms will reach 524 million people. A nice market. But the little Deezer is already lagging behind its main competitors. That same year, Spotify had 31% of the market share (slightly down), Apple Music 15%, Amazon music and Tencent respectively 13%, YouTube music 8% (very strong growth), followed by NetEase and finally the French platform, with 2% of the volume.

Deezer admits it, the frog will not try to be bigger than the ox (Spotify). But it can count on a remarkable growth of the sector to support its development: + 26.4% growth between 2020 and 2021, that is to say an increase of 109.5 million pairs of ears in one year, and an average annual growth rate of 28% between 2016 and 2020. It will also be able to capitalize on the slow but undeniable erosion of its Swedish rival. At the end of 2021, Deezer claimed 9.6 million subscribers, but still had an operating loss of 120 million euros for the year. The first objective will therefore be to reach profitability. The second one has already been unveiled by the management: 1 billion euros in revenues by 2025. With the growth of 5.5% between 2020 and 2021, and a revenue that reaches a ceiling of 400 million euros in 2021, it would take Deezer 17 to 18 years to reach this goal. So we're going to have to find new sources of revenue.

Which ones? First of all, international expansion. Today, the group has a strong presence in France, Brazil (where it already has 2.7 million subscribers), and more marginally in the UK, Italy, Spain and the US. Partnerships: Orange, FNAC and SFR are the names put forward in France, TIM Celular in Brazil and RTL in Germany. Finally, the penetration rate: Iris Knobloch estimates that in France, it should rise from 18% in 2020 to 30% in 2027.