BEIJING/SINGAPORE (Reuters) - China's new coal output rate, hiked this week in the teeth of an energy crunch, puts it on pace to produce more of the fuel this year than ever before if the increase is sustained, according to Reuters' calculations based on official Beijing data.

That record level, just under 4 billion tonnes if new production rates are maintained until year-end, significantly raises potential to produce electricity in a country where most power is generated from coal, going some way to easing growth worries https://www.reuters.com/world/china/china-energy-crunch-triggers-alarm-pleas-more-coal-2021-09-28 that have clouded over the world's no. 2 economy.

The surge in coal output comes just days before world leaders meet https://www.reuters.com/business/environment/cop26-glasgow-who-is-going-who-is-not-2021-10-15 in Glasgow for the U.N. COP26 summit on climate change - accelerated by the large emissions caused by burning coal and other dirty fuels.

(GRAPHIC: China's coal output is on track to hit a new all-time record in October if the latest output pace is maintained -

So far, there is still no announcement on whether Chinese President Xi Jinping will attend the COP26 talks, which clouds the prospects for China's commitments to global climate cooperation.

But relief for power producers may be short-lived: China is already weathering a below-average cold snap and winter heating needs are about to rocket, leaving the supply-demand balance on a tightrope.

Beijing's chief planning agency, the National Development and Reform Commission (NDRC) said coal output had risen to 11.6 million tonnes per day as of Oct. 18. That represented an 8.6% rise from late September, after an array of measures were deployed to fix a power crisis that sparked energy rationing and a growth slowdown.

The NDRC said it was targeting a 12 million tonne per day rate as it tries to lower prices. 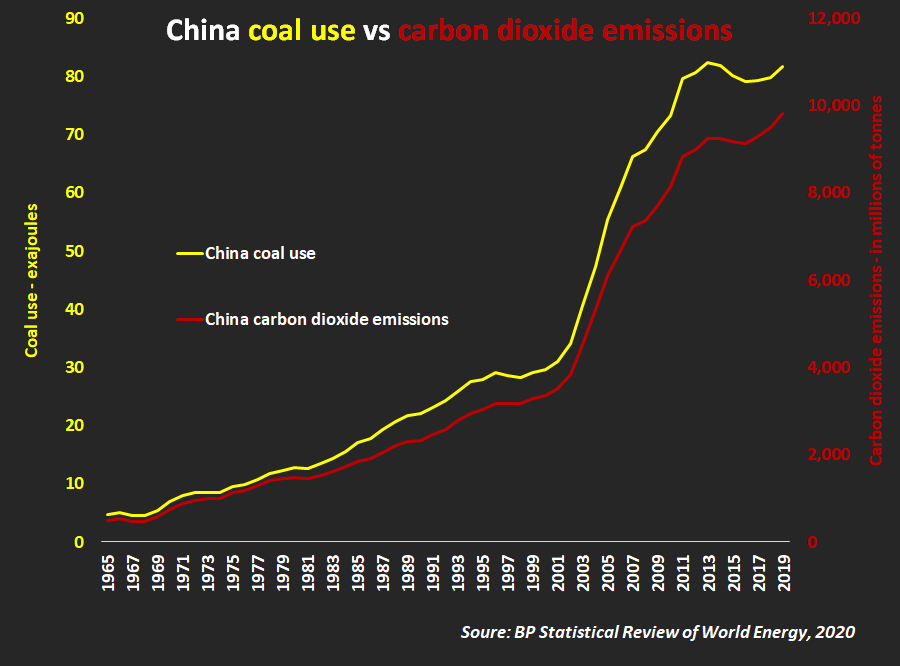 Even if the current rate of 11.6 million tonnes is not surpassed, however, that average daily pace for October would mark a new monthly record of 359.6 million tonnes. If sustained through the entire final quarter, that would amount to 1.067 billion tonnes, according to Reuters calculations using National Bureau of Statistics data.

China is the world's top coal miner and consumer, and emitter of CO2. The country has pledged steep cuts to its carbon intensity, or its carbon dioxide emissions per unit of gross domestic product, by 2030, will become carbon neutral by 2060, and halt construction of coal power plants abroad. https://www.reuters.com/business/energy/chinas-overseas-coal-power-retreat-could-wipe-out-50-bln-investment-2021-09-22

However, none of China's carbon targets exclude the possibility that coal and energy consumption will rise at home in the near term.

Tight supplies and record prices of coal have been the main causes behind the power crunch that has chilled business activity across the country in recent weeks. In response, Beijing has taken several emergency steps to raise coal and power supplies, including approving new coal mines and allowing power firms to rare chance to raise prices for customers

Coal-fired power accounts for roughly 60% of China's total electricity generation. Over the first three quarters of 2021, China's power generation expanded by 11% on the year, but power consumption grew by 13% as heavy industry and manufacturers cranked up output as coronavirus pandemic restrictions eased. 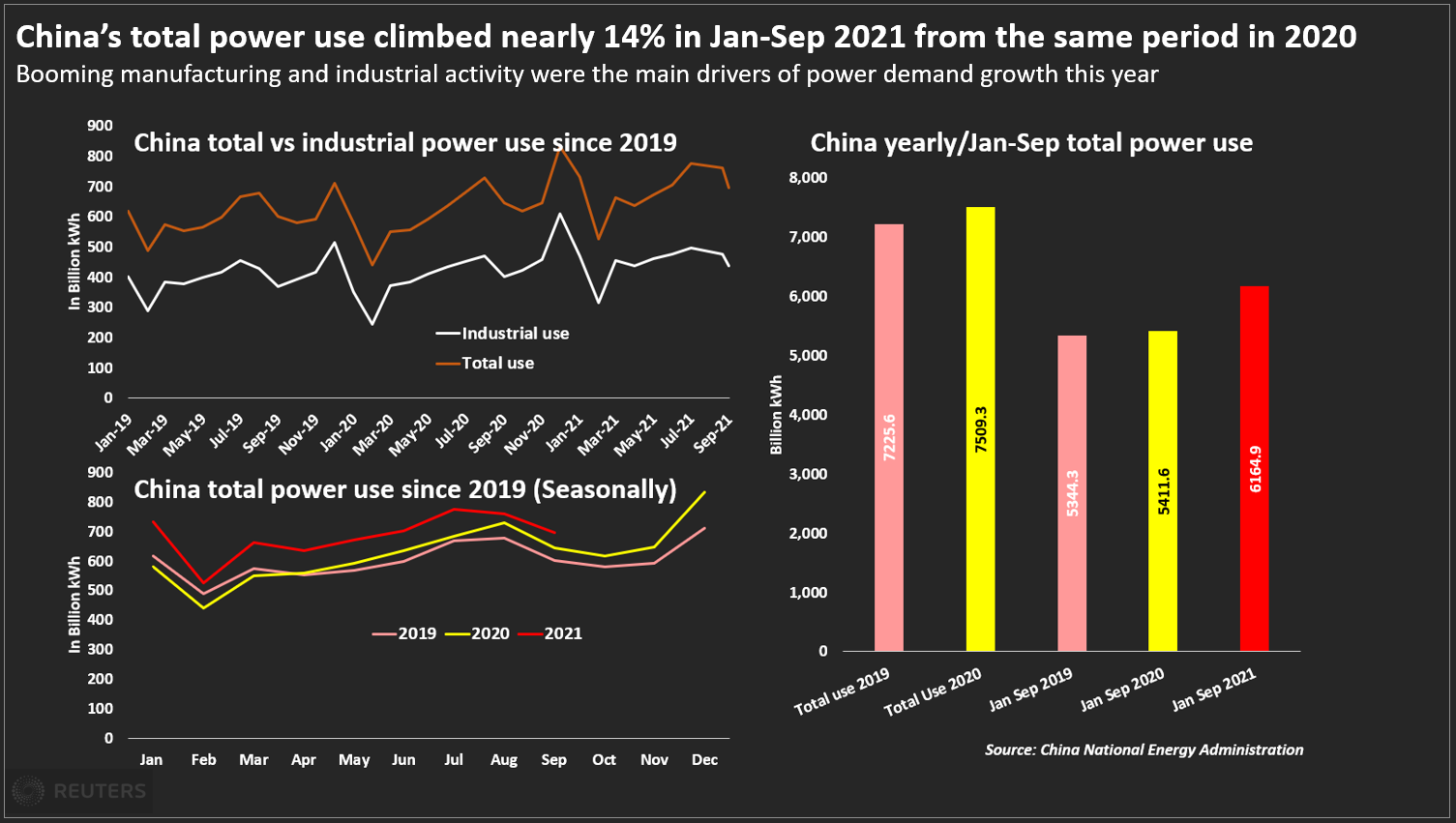 "China has added the equivalent of two U.K. power markets in demand so far this year, the biggest single-year increase for any country on record," said Alex Whitworth, head of Asia Pacific Power and Renewables Research from Wood Mackenzie.

Given the pressure on power generators to raise output, the extra coal being mined should translate into more power.

If all of the roughly 460,000 tonnes of additional coal being produced per day in October was used for power generation, that could raise China's daily power output by 6.7%, measured by data from the National Energy Administration (NEA), to 1.52 bln kWh.

With stepped up coal imports in September also expected to reach power producers over the coming weeks, coal-fired power generation could rise by even more.

Exactly how much this additional potential power generation will alleviate the recent power crunch remains difficult to determine, analysts say.

"I think the acute shortages will be resolved in the next weeks, especially as demand is softening as well," said Lauri Myllyvirta, lead analyst with the Centre for Research on Energy and Clean Air.

"However, as long as prices stay at the current level, generation will not be anywhere near profitable even if the flexibility in the tariffs is made use of. So plants will run as little as they can get away with." 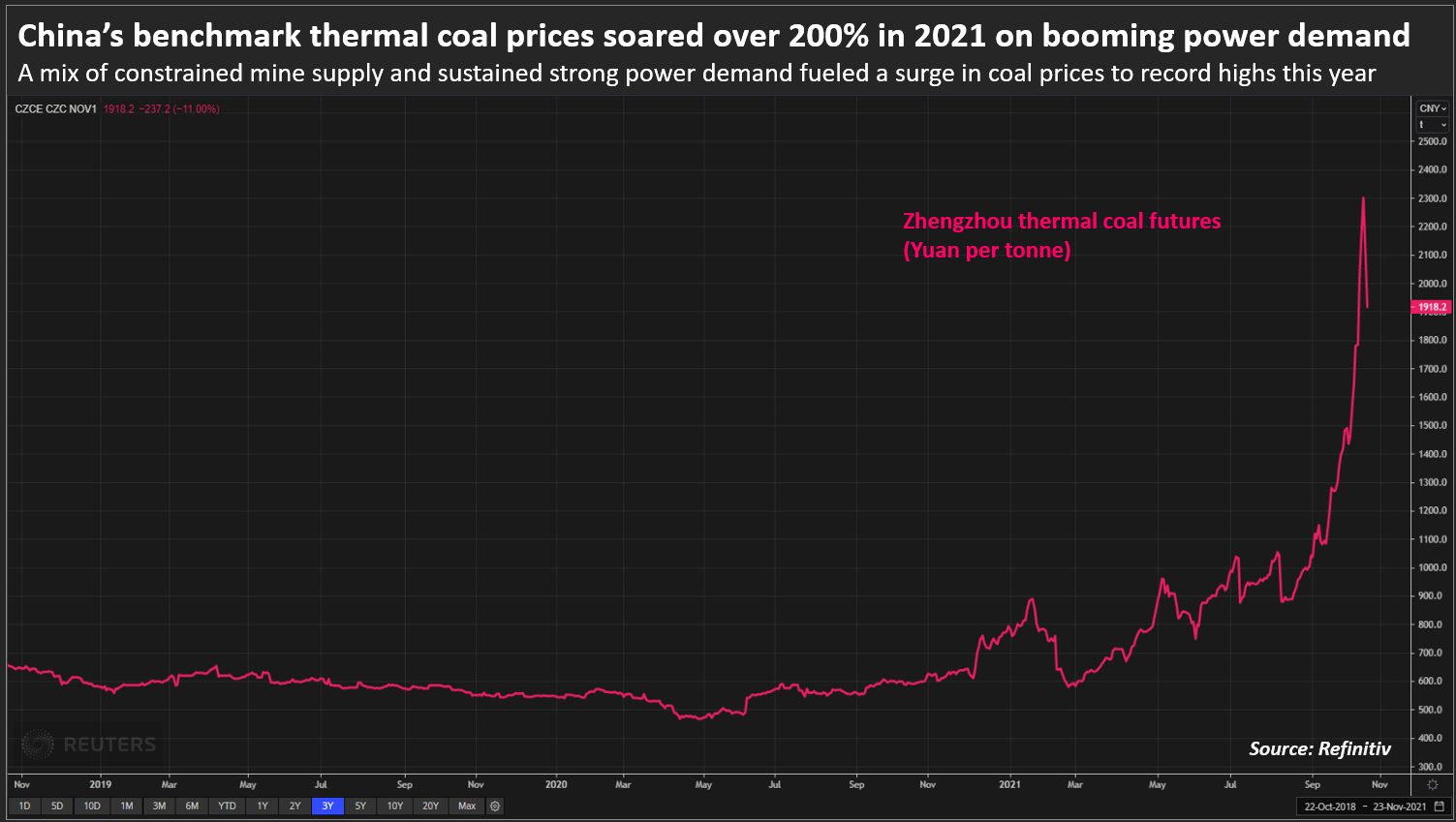 China's thermal coal prices nearly tripled in 2021 through mid-October to record highs. While they have plunged in recent days after Beijing's aggressive interventions, prices remain more than 200% above year-ago levels.

Another complicating factor is that demand for heating is expected to rise after temperature forecasts for northern China slipped below normal through the rest of October - raising the spectre of a sustained cold spell during winter.

"Power demand for the rest of the year is a key parameter to see how it will respond to high prices. The government is making strong efforts to increase coal supply but so far has been unable to meet demand," said Wood Mackenzie's Whitworth.

By Muyu Xu and Gavin Maguire