To avoid a repeat of 2008, Main Street America says help needs to be fast

Small businesses in the United States say promised help from the federal government and the Federal Reserve is welcome news in the battle to stay afloat through the coronavirus crisis, but needs to hit their bank accounts fast if it's to make a difference as they barter with landlords, hold onto tax receipts, haggle with vendors and hope furloughed staff can get by on unemployment aid.

?There?s no way that we can pay all the bills that are related to our business - the internet, dishwasher, our compost,? said Terry Sok-Wolfson, who has closed her bar and two Oakland, California-area restaurants already and says the third can survive for perhaps two weeks based on her slender cash reserves. Of 30 employees, 24 have been laid off.

For millions of U.S. small companies, where personal property is often pledged to get business loans and credit cards undergird cash flow, the coming days will be critical in determining whether a historic federal rescue effort limits the economic damage from the ongoing health crisis. Otherwise "Main Street" companies will bear the brunt of an unparalleled and rapid shutdown of the U.S. economy.

How fast loans can be made could determine whether the economic fallout from the current crisis becomes as deep and persistent as it was when a housing bubble collapsed in 2007 and triggered a two-year financial crisis and recession.

Legislation approved by the Senate and expected to pass the House this week includes about $350 billion for lending to small businesses, and nearly $450 billion that the U.S. Federal Reserve could be allowed to expand into more than $4 trillion in help for small and medium-sized firms.

The programs dovetail with Small Business Administration loans meant to let firms cover wages, rents and other expenses through June. Much of that debt is to be forgiven if companies keep employees on the payroll.

Details of a Fed "Main Street Business Lending Programme" are expected to be announced soon after the emergency legislation pending in Congress is enacted. Fed Chair Jerome Powell said Thursday it is meant to make the economy's eventual restart "as vigorous as possible."

The Fed programme is expected to target businesses with between 500 and 10,000 employees, with other steps being taken to aid the largest firms and the SBA helping smaller ones.

Treasury Secretary Steven Mnuchin said Wednesday the aim is to make small business finance as simple as, ?you go into a bank, you get a loan instantaneously. It covers your payroll. You hire the people. It's forgiven.?

Instant lending would be a big shift from the current system, where SBA loans can take 60 to 90 days.

During the last recession, the number of U.S. companies dropped by more than 100,000 from 2008 to 2010 and the number of jobs by 8.5 million, with disproportionate losses among mid-sized firms in the construction and manufacturing industries.

This time could be different as the economic shock hits hardest in service and hospitality industries where public contact is part of what's being sold in the restaurants, bars, hotels, theatres and retail stores that are the foundation of U.S. consumer society.

The St. Louis Fed estimates that 46 million workers that have "high contact" with the public may become unemployed in coming weeks - with the aim now to make their time off the job as short as public health concerns allow, and with offsetting benefits like unemployment payments.

The upside: If the shock is short they may return to work quickly in roughly similar roles, unlike 2008 when long-term unemployment also spiked and workers sometimes found they were not qualified for jobs in plants that had been reengineered during the downturn.

JP Morgan Institute research has shown some resilience among small firms. Event studies involving hurricanes, for example, indicated firms lost dramatic amounts of revenue, but also cut expenses deeply, trimmed their losses, and managed with only a small amount of damage to their cash reserves.

But buffers are slim. In a study of 600,000 firms, only half had enough cash to cover expenses for 27 days. That means it is probably about a month before owners are faced with more debt, more personal financial risk, or a change of career.

Manufacturers, who have undergone sequential shocks since the early 1990s from globalisation as well as recession, may actually be better positioned this time around - assuming the downturn is short.

Many are still filling existing and incoming orders, and can better manage the health risks of continued operations given their control over factory floors.

Look Trailers, based in Middlebury, Indiana, has scaled back at four of its six plants and furloughed 400 of 525 workers, who can now claim unemployment benefits.

But chief executive Matt Arnold said the assumption is that demand will build through the slowdown, and that his network of dealers will be able to finance inventory once the rebound begins.

"Everyone has just furloughed people and is waiting for it to turn positive ... It's not like 2008," he said. His company's bank credit line is likely enough to get him through the crisis, he said.

By contrast, San Francisco art supply retailer Howard Flax let go all 18 of his employees after officials issued a shelter in place order. He is now bringing back two of them to help run an appointment-only operation from one of his stores. He feels he can negotiate with his landlord, delay insurance payments, and make other adjustments as he anticipates applying for an SBA loan.

He has other problems: Only about two weeks of inventory on hand and a supplier in New Orleans who had to close.

Assuming the shutdown continues, help will need to come soon.

?Taking out a loan is not anything that small businesses want to do," he said. "That?s going to be the hard part down the road, but if that?s the only option, you do what you got to do.? 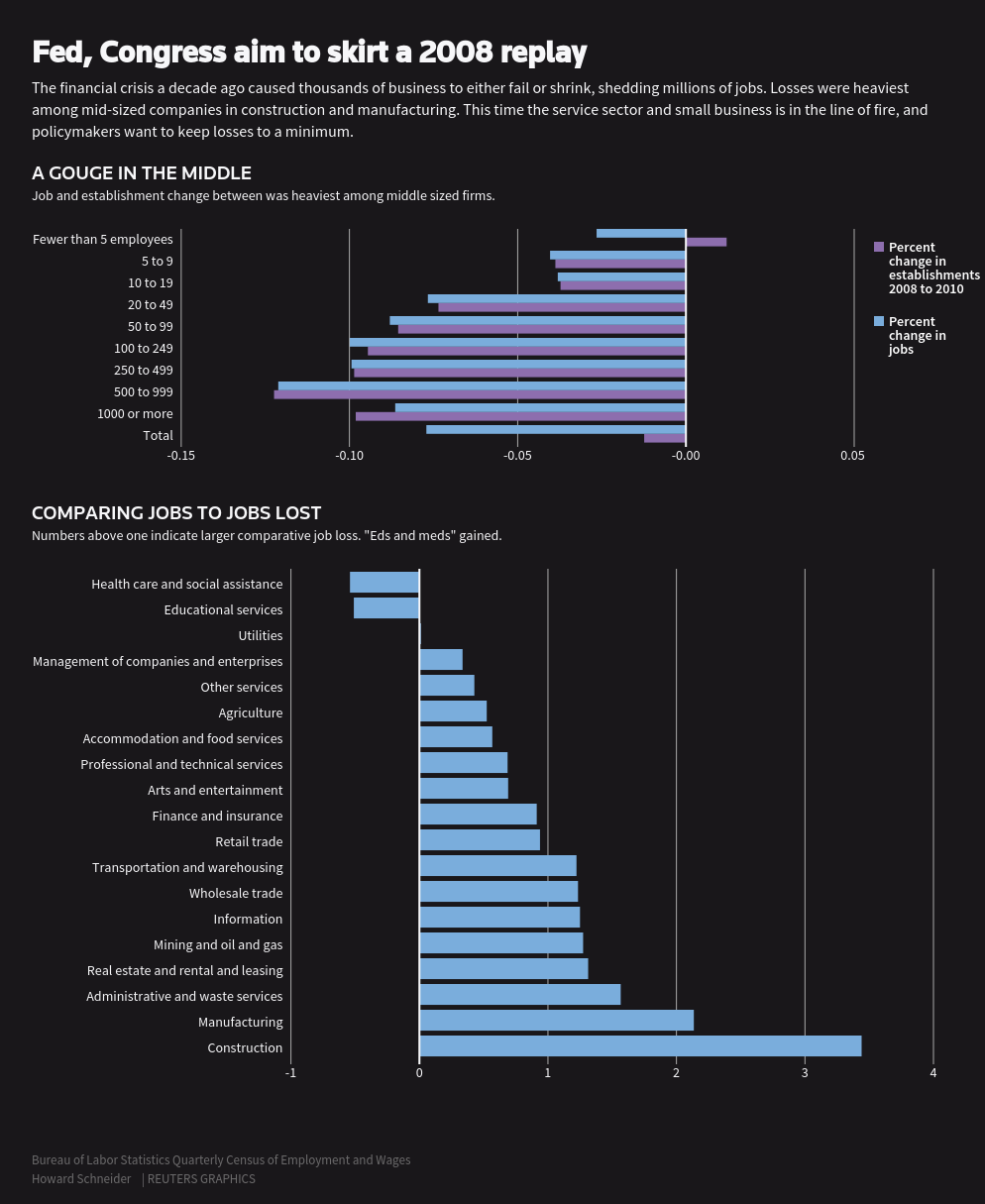