Thailand central bank warns economy will contract in 2020, but holds fire on rates

Thailand's central bank said on Wednesday it now expects Southeast Asia's second-largest economy to sharply contract this year as the coronavirus pandemic deals a severe blow to businesses and households.

At a monetary policy committee meeting, the Bank of Thailand (BOT) slashed its 2020 GDP forecast to minus 5.3%, which would be the first contraction since the global financial crisis in 2009, from 2.8% growth seen three months ago.

But it opted to save its dwindling policy ammunition by keeping its one-day repurchase rate <THCBIR=ECI> rate steady at 0.75%, after cutting it at a special meeting last week by 25 basis points to a record low.

The committee voted 4-2 to hold the rate unchanged. The dissenters voted for a 25 bp cut, while one member was absent.

"The committee viewed that the spreading of the COVID-19 in the period ahead would be severe and the situation would take some time before returning to normal," the MPC said in a statement.

Kobsidthi Silpachai, head of capital markets research of Kasikornbank, said "the vote of 4 to 2 for a hold coupled with the sharp downward revision should spell more monetary easing down the road given the risk of a deflation spiral".

In a Reuters poll, 10 economists had predicted a 25 bp cut on Wednesday while nine others forecast no policy change.

Tim Leelahaphan, economist at Standard Chartered, said: "We expect two further policy rate cuts of 25 bps each in Q2 and Q3, taking the rate to a new record low of 0.25% at end-2020".

The BOT has cut rates four times since August, with the shock from the virus outbreak heaping more pressure on the already struggling economy. Tourism has plunged due to global travel curbs and manufacturers are struggling with weakening demand and disruptions in supply chains.

Central banks around the world have slashed interest rates in the past few weeks and provided additional stimulus in some cases to try to help mitigate the damage to the global economy from the coronavirus pandemic. Governments are also ramping up relief measures.

It predicts foreign tourist numbers will tumble 60% to 15 million this year. So far, Thailand has reported 934 virus cases, with four deaths.

Last year's growth was just 2.4%, the lowest in five years.

The BOT said monetary policies would play a major role in helping the economy after it had recently introduced steps to ensure sufficient liquidity in the markets.

The BOT now expects headline inflation to be minus 1.0% this year versus plus 0.8% seen earlier and against its target range of 1-3%.

By Orathai Sriring and Kitiphong Thaichareon 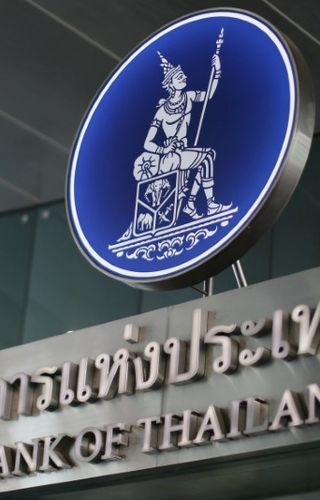