US government bond yields are at their lowest level since 2016, German investor sentiment fell in August to -44.1 points, compared to -27.8 expected. In Italy, Matteo Salvini has announced the end of the ruling coalition.

ZEW index at its lowest level in 8 years. German investor sentiment fell in August to -44.1 points, compared to -27.8 expected. Affected by the Sino-American trade war, currency devaluation, uncertainties related to Brexit and the difficulties of the German economy (exports and declining industrial production), the ZEW index is at its lowest levels since December 2011.

The franc is very much in demand. The CHF is trading at two-year highs against the single currency and the Swiss National Bank (SNB), which does not appreciate this trend, is intervening in the foreign exchange market to try to cushion the pair's fall. Its sight deposits (credit balances held by banks and other financial market participants at the SNB) increased by CHF 2.8 billion compared to the previous week, the highest increase in more than two years, as shown in the graph published by Bloomberg. 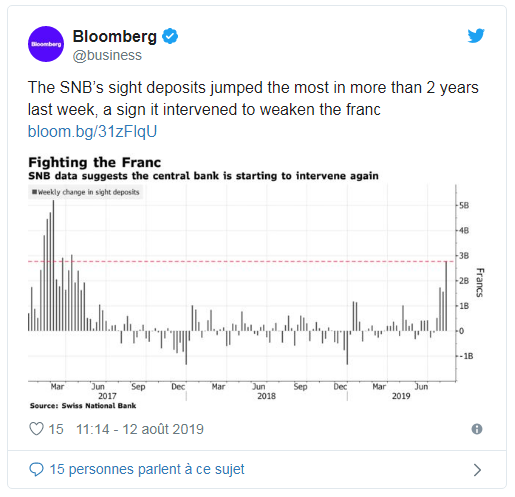 The Italian Senate will decide on a date for the vote of confidence in the government after Matteo Salvini has announced the end of the coalition. The vote could take place 60 days after the dissolution of the current parliament and rumours suggest that a new government could be created with the support of the Forza Italia Party and the far right Party.

Following the demonstrations of the last few days in China, the Hong Kong dollar is under pressure and is approaching 7.85.

Most British people are in favor of a "Brexit by any means". A majority of Britons believe that Prime Minister Boris Johnson must succeed in getting the United Kingdom out of the European Union "by any means" on October 31, even if it means suspending the parliamentary vote, according to a poll published by the Telegraph. According to the ComRes opinion poll, 54% of respondents said they want to go ahead with Brexit, whatever it takes.