By John McCrank and Herbert Lash

A gauge of global equities rebounded and crude oil rose on Friday after U.S. President Donald Trump ordered an end to Washington's special treatment of Hong Kong, a move investors welcomed as unlikely to jeopardize a trade accord with China.

Trump said China broke its word over Hong Kong's autonomy but did not mention any action that would undermine the Phase 1 trade deal that Washington and Beijing signed this year.

China's parliament on Thursday passed new national security legislation for the city, casting doubt on its freedoms and its future as a finance hub.

U.S. stocks pared losses after Trump's remarks and oil gained on hopes the dispute will not curb the economy's nascent recovery from the coronavirus pandemic.

Investors were worried about a further deterioration in Sino-U.S. relations, which have soured considerably through the COVID-19 pandemic.

"The market was worried he was going to announce something substantial, something detrimental to the U.S. economy. Then as he spoke it became clear the actions being taken were not going to be as dramatic as originally feared," said Chris Zaccarelli, chief investment officer at Independent Advisor Alliance in Charlotte, North Carolina.

Overnight in Asia, MSCI's broadest index of Asia-Pacific shares outside Japan <.MIAPJ0000PUS> fell 0.2%. Japan's Nikkei <.N225> retreated from a three-month high and the yen rose to a two-week high of 107.06 against the dollar, while bonds rose.

Hong Kong's Hang Seng declined 0.8% and has lost about 3% in the two weeks since news of China's security legislation broke. [.HK]

Federal Reserve Chair Jerome Powell on Friday reiterated the U.S. central bank's promise to use its tools to mitigate economic fallout from the pandemic, even investors were turning their attention to the next phase of its response.

Equity markets have had difficulty gauging the pandemic's impact on earnings. But data on Friday showed a record drop in U.S. consumer spending for the second straight month and the highest-ever saving rate, reflecting high levels of economic uncertainty.

Investors have been buying stocks as lockdowns have been lifted or eased, betting on a speedy recovery.

MSCI's All Country World Index <.MIWD00000PUS>, which tracks stocks across 49 countries, was up around 3.5% this week - its best weekly performance since April.

The euro climbed above its 200-day moving average for the first time since late March as the European Union's 750 billion-euro coronavirus recovery fund fueled optimism. [FRX/] It was up 1.3% month-to-date against the greenback, last trading at $1.1097.

The dollar index <=USD> fell 0.178%against a basket of currencies.

Both contracts had their biggest monthly gains in years, supported by production cuts and optimism about demand recovery led by China. 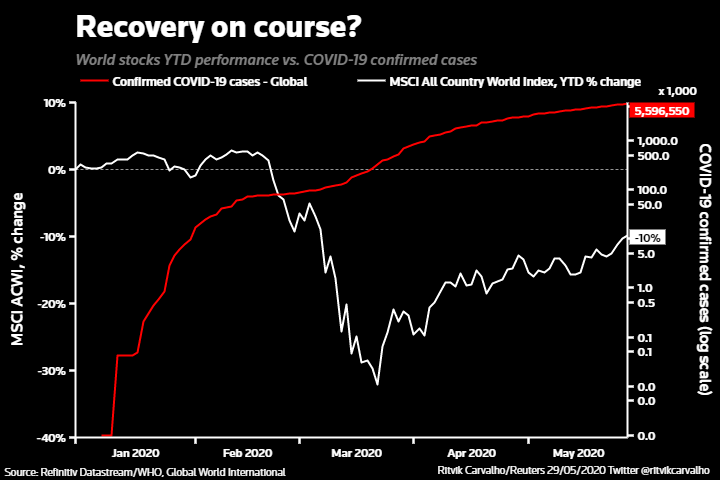