A measure of stocks across the globe rose for a fourth straight day on Thursday after June U.S. payrolls grew by a record 4.8 million, but investors also flocked to the safe-haven dollar and U.S. Treasuries on concerns about surging COVID-19 cases in many U.S. states.

Several states, along with some other parts of the world, are reversing or pausing reopenings to tackle a recent surge in infections, leaving analysts worried about another sell-off in financial markets if the damage mounts.

June's job survey, which saw the unemployment rate fall to near 11% and average wages drop 1.2%, was taken just as the spike in COVID-19 cases started to accelerate. Over 31 million Americans were still collecting unemployment checks weekly.

"The strong rebound would normally be an unambiguously positive sign that a recovery is under way, (but) it is being accompanied by a sharp rise in new infections, which was what caused the collapse in the first place," said Mike Bell, global market strategist at JP Morgan Asset Management in London.

"It is therefore too soon to say for certain that this recovery in employment sounds the all-clear for investors." 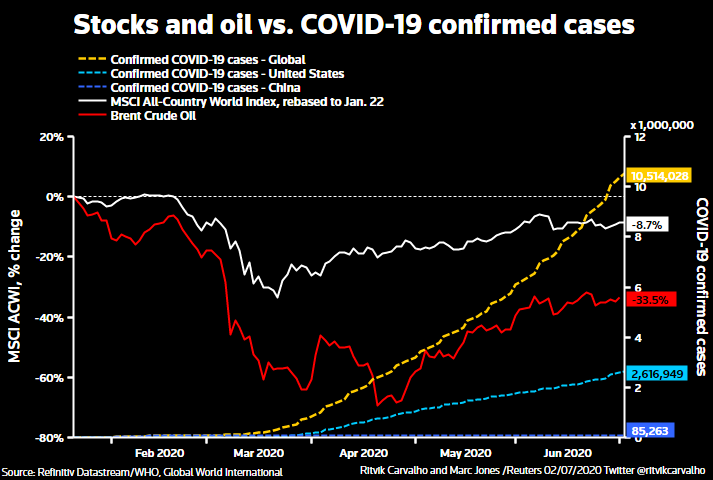 U.S. financial markets will be closed on Friday in observance of Saturday's Independence Day holiday.

On Thursday, oil futures prices were lifted by the U.S. employment numbers but gains were limited as the spike in U.S. coronavirus infections fanned concerns that economic activity would weaken in coming weeks.

Treasury yields initially rose after the strong jobs numbers, but backtracked and traded lower for most of the session.

"The knee-jerk move in the wake of the jobs report made sense," said Ben Jeffery, a strategist at BMO Capital Markets in New York. "But clearly people were reluctant to sort of push that sell-off just given the headline risk over the weekend and the fact that things on the virus front still seem to be worsening."

"Dollar performance will hinge on the U.S. response to COVID," said Juan Perez, senior currency trader at Tempus Inc in Washington. "On that end, the U.S. is losing because the situation is far more difficult than in other parts of the world."