South African inflation is expected to be lower in 2020 than previously forecast and the eventual reading could be lower still, a Reuters poll showed on Thursday, opening the door for the central bank to cut interest rates again during the year.

Inflation will average 4.4% this year - 0.4 percentage points lower than in last month's survey - and 4.7% next year, medians from the poll of around 30 economists taken in the past week showed.

"We see the risks to the inflation forecasts as decidedly biased to the downside given weak global inflation and subdued local demand. Food inflation is also likely to remain tepid despite forecast below-average rainfall," said Elna Moolman, economist at Standard Bank in Johannesburg.

In all, nine of 17 economists who responded to an extra question said risks to inflation forecasts were skewed more to the downside for 2020. The remaining eight were split between more to the upside or even and gave a 45% probability inflation would surprise slower.

Still, the poll suggested the repo rate would be cut only once more this year - by 25 basis points to 6.0% - in July or September, after the bank surprised with a cut last month. It had been expected to hold off until May, after a Moody's ratings review scheduled for March and a government budget in February.

Inflation has generally been trending downwards globally and more so recently in South Africa, where prices have been sticky in the past decade.

The Reserve Bank aims to keep inflation in its 3-6% comfort zone. In recent quarters it has trended towards the lower end of that range.

Goldman Sachs had the most benign projection for this year's average at 3.9% and argues that the country's monetary policy stance is restricting economic growth.

The poll expects GDP growth at 0.8% this year and 1.3% next, suggesting very minimal economic activity for South Africans eager to join the world of work. Unemployment held at a near 17-year high of 29% in the last quarter of 2019.

Paribas economist Jeffrey Schultz said the spread between the gross domestic product (GDP) deflator and headline consumer price index had been negative for five straight quarters for the first time since 2008.

"This supports our call for persistent benign inflation," he said. "As such, we continue to see strong downside risks to the SARB's 4.7% CPI estimate for 2020, opening up room for more rate cuts this year." 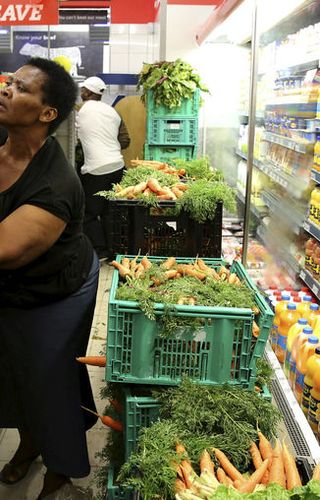