NEW YORK (Reuters) - U.S. and European stocks jumped, the dollar strengthened and Treasury yields rose on Tuesday after the United States said it would delay tariffs on some Chinese products, easing concerns that a protracted trade war would harm global growth.

President Donald Trump backed off his plan to impose 10% tariffs on Sept. 1 on remaining Chinese imports, delaying duties on cellphones, laptops and many other consumer goods in the hopes of blunting their impact on U.S. holiday sales.

Shares of Apple Inc, a likely beneficiary of the tariff delay, rose 4.5% and the information technology sector rose 2.46%, the biggest gainer among the 11 S&P 500 sectors.

Investors are closely watching the headlines and that is what markets are trading off of, said Candice Bangsund, a global asset allocation strategist at Fiera Capital in Montreal.

"The news today is obviously good news. Risk appetite has improved drastically but it's consistent with the environment of elevated uncertainty," Bangsund said.

Global growth should re-accelerate later this year as major central banks cut interest rates and recent economic data proves better than where markets have traded on it, Bangsund said.

The damage created by tariffs will not go away because economic uncertainly remains, said Kristina Hooper, chief global market strategist at Invesco in New York.

"We can continue in the situation we've been in for months which is one step forward, further into the trade war abyss, followed by one step or a half step backwards," Hooper said.

Wall Street rallied on news of the tariff delay.

Major equity indices had tumbled roughly 5% since late July on growing concerns that the ongoing U.S.-Chinese trade dispute would slam global growth and fester unresolved until after the November 2020 U.S. presidential election. Markets also had slipped, with gold earlier hitting a more than six-year high, as the unrest in Hong Kong and a rout in the Argentine peso drove investors already rattled by the trade war into havens such as bullion, bonds and the yen.

The yen benefits in moments of geopolitical uncertainty and during economic downturns. The U.S. dollar rose 1.27% to 106.63 yen per dollar. 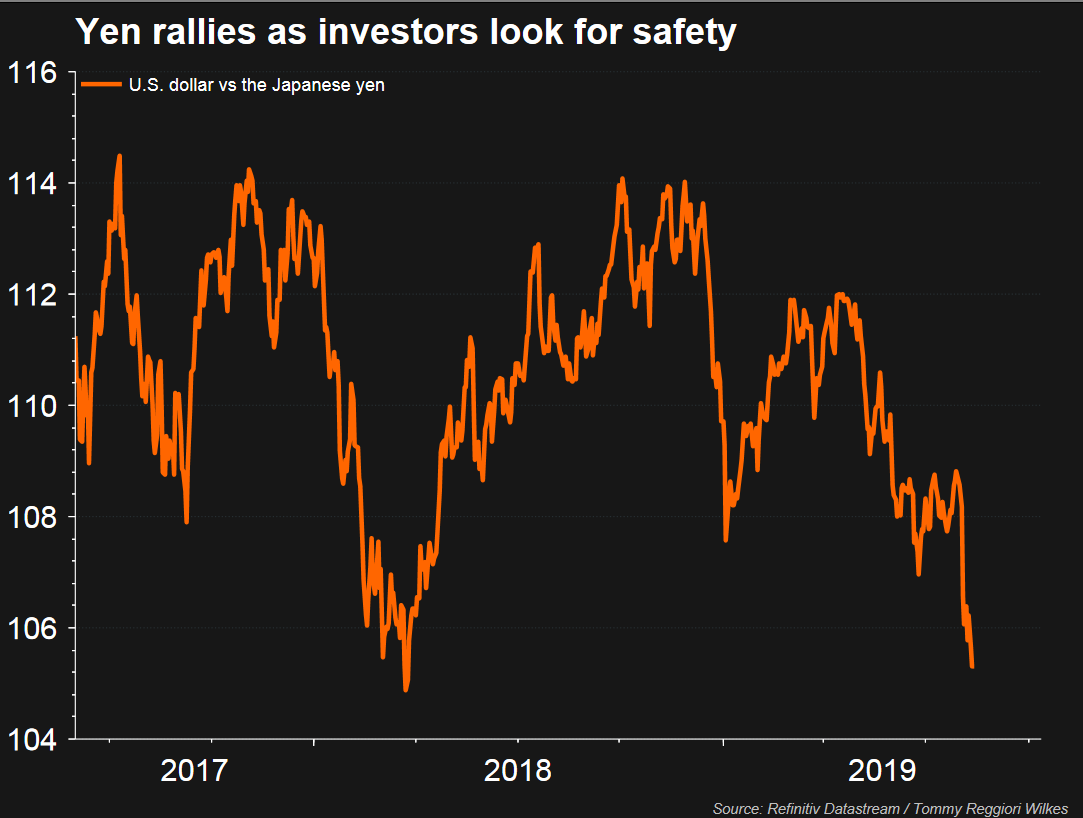 Yields on the benchmark U.S. 10-year Treasury notes hit session highs, while those on 30-year Treasury bonds rallied from more than three-year lows. Traders earlier were bracing for 30-year yields to sink to a record low below 2.08%.

Oil prices rose more than 3% on the trade news.

Prior to Tuesday's gains, Brent had traded down more than 20% since hitting a year high in April.

The Argentine peso was less volatile, trading in a tighter range, down 6.04% at 55.30 to the dollar.

(Reporting by Herbert Lash; Editing by Nick Zieminski and Will Dunham)