Bank of America Corp got stung by lower interest rates in the fourth quarter, sending its profit down 4%, a trend that management expects to continue this year.

The Charlotte, North Carolina-based lender is especially vulnerable to rate movements because of the composition of its balance sheet. As the Federal Reserve cut rates three times last year, analysts predicted Bank of America's earnings would suffer.

The bank blunted the impact last quarter by growing loans at a rapid clip, and managed to beat Wall Street's quarterly forecasts. But Bank of America shares fell 2% in morning trading after Chief Financial Officer Paul Donofrio said net interest income will decline through the first six months of 2020.

Donofrio expects to improve that metric later in the year by growing loans and reducing interest rates on deposits, but predicted Bank of America's net interest income will be "modestly" lower for the full year.

"The rate environment definitely has an impact, but it isn't insurmountable," he said in a note to clients.

The bank's results were also helped by bond trading, whose revenue rose 25% to $1.8 billion.

Trading is a small part of Bank of America's income statement compared with consumer banking, its biggest business. Revenue there fell 5% to $9.5 billion, largely due to lower rates.

The bank's net interest margin, which measures how profitably a bank can lend out depositors' funds, fell to 2.35% from 2.52% a year earlier, and from 2.41% in the prior quarter.

Overall, the bank's profit fell to $6.75 billion from $7.04 billion a year earlier. Excluding special items, the bank earned 75 cents per share, beating the average analyst estimate of 68 cents, according to Refinitiv.

By Imani Moise and Bharath ManjeshR 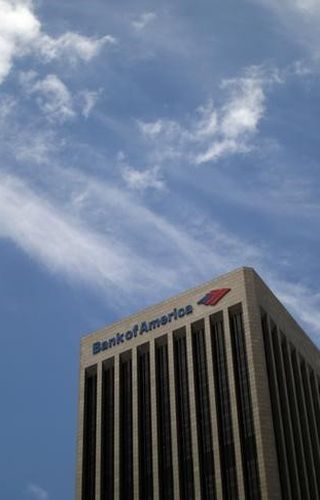