Global stocks succumb to shutdown fears but China charges on

By Herbert Lash and Marc Jones

Equity markets slid on Thursday after U.S. data raised worries about the economy's recovery and doused enthusiasm that drove a Chinese stock rally for an eighth straight day, while the dollar rebounded as new coronavirus cases hit another record.

The dollar had struggled early in the session, with China's yuan climbing to a four-month peak as investors poured into Chinese stocks on growing signs of a recovery that also helped lift copper prices to more than a year's high.

But concerns about renewed U.S. coronavirus lockdowns kept a lid on oil prices and offset signs of a pick-up in U.S. fuel demand. A slowing rate of decline in weekly U.S. jobless claims from a peak in March also gave investors pause.

Rising coronavirus cases and slower improvement in the U.S. jobs market amounted to a one-two punch for investors.

"We are reaching the levels of unemployment which are likely to persist until a more true re-opening can occur, either with a vaccine, novel treatment, or time," said Jamie Cox, managing partner at Harris Financial Group in Richmond, Virginia.

The MSCI world equity index, which tracks shares in 49 nations, retreated after early gains. The index fell 0.35% after its broadest measure of Asia-Pacific shares outside Japan rose 0.87% on the China rally.

More than 60,000 new U.S. coronavirus infections were reported on Wednesday and U.S. deaths from the virus rose by more than 900 for a second straight day, the highest since early June.

U.S. jobless claims have been gradually falling, though they remained roughly double their highest point during the 2007-09 Great Recession.

Oil prices fell about 3% as investors worried that renewed U.S. lockdowns to contain the spread of coronavirus would sap fuel consumption.

"COVID-19 cases continue to increase in the U.S. and traders wonder when they will see an end of this, when the trend will change," said Louise Dickson, oil markets analyst at Rystad Energy.

Overnight in Asia, Chinese stocks set their longest winning streak in two years, and the yuan strengthened more than 7% [.SS] despite rising tension over Hong Kong and the economic uncertainty caused by COVID-19.

It was the blue-chip Shenzhen index's eighth straight day of gains, adding another 1.5% to its 16% surge this month, and helped Europe initially on an upward trajectory after hesitation caused by uninspiring German data. [.EU]

The dollar's early downward momentum supported risk sentiment. It was at a one-month low against the euro, a three-week low versus the British pound and a four-month trough against the Swiss franc before rebounding. [/FRX]

Asia's investors have been riding high after a front-page editorial in Monday's China Securities Journal that extolled market fundamentals, which was taken as official encouragement to buy stocks.

State-run media warned on Thursday that investors should still pursue rational investments and manage risks, but that did not rein in the bulls.

Britain suffered another 5,000 retail job losses and Germany's export figures recovered less than expected in May as demand remained subdued despite lockdowns being lifted in large parts of Europe.

The dollar index, which tracks the greenback versus a basket of six currencies, rose 0.39% to 96.803.

Gold prices retreated a day after vaulting to nearly nine-year highs. U.S. gold futures settled down 0.9% at $1,803.80 an ounce.

For a graphic on World financial markets in 2020: 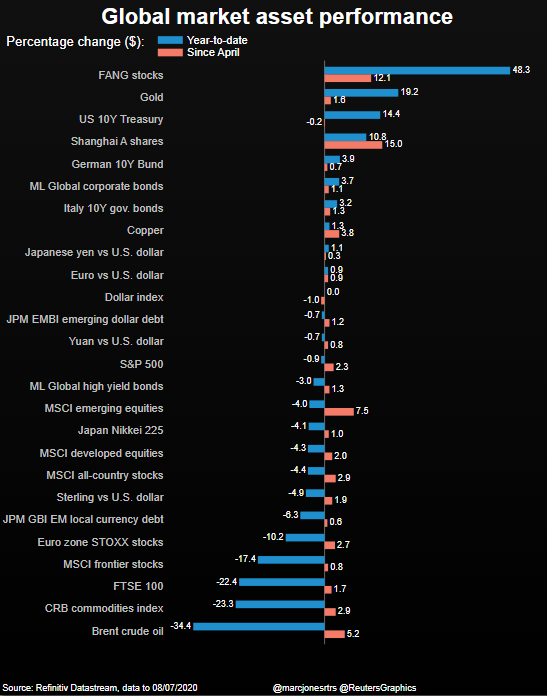