Gap in U.S. Black and white unemployment rates is widest in five years

The United States saw the widest gap in unemployment rates for African Americans and whites in five years in June, underscoring an uneven nascent recovery from historic job losses triggered by the coronavirus pandemic.

Jobless rates for both groups fell in June, but the rate for whites came down at a much faster rate. The white unemployment rate fell 2.3 percentage points to 10.1% from 12.4%, while the rate for Blacks dropped 1.4 points to 15.4% from 16.8%, according to data released by the Labor Department on Thursday.

At 5.3 percentage points, the gap is now the widest since May 2015 and exposes an important economic component of racial inequality at a pivotal moment in U.S. race relations. The country has been rocked by nationwide protests over police brutality against African Americans in recent weeks, following the death of a Black man in police custody in Minneapolis.

"Unfortunately that is consistent with the pattern that we have observed for decades in this country," said Valerie Wilson, director of the Economic Policy Institute's program on race, ethnicity, and the economy.

For a graphic on Black vs white unemployment: 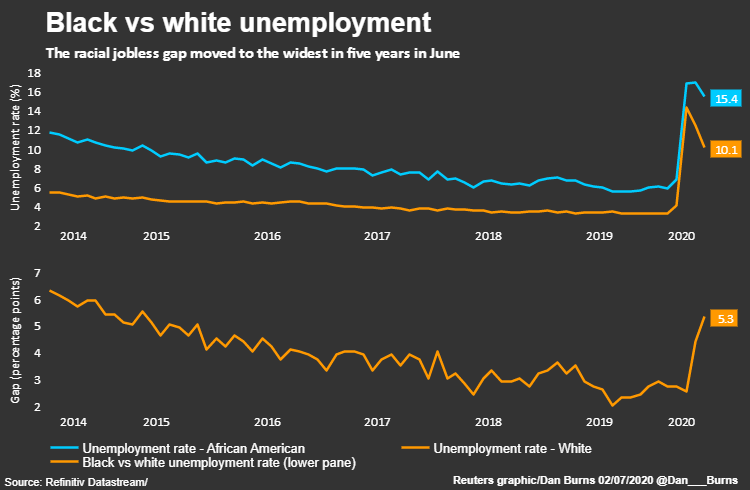 The coronavirus pandemic brought an abrupt end to the record-long U.S. economic expansion just as it was creating better job opportunities for Black workers and other minorities. Job losses fell hardest on women and workers of color.

As the labor market slowly recovers, Black workers are seemingly among the last to benefit, repeating the pattern typically seen following a recession, said Wilson.

"Coming out of the Great Recession, we were almost 10 years in before we started to see some real consistent improvement in the Black unemployment rate," Wilson said.

The unemployment rate for Black males rose in June to 16.3%, the highest level since the fall of 2011, from 15.5% in May. The labor force participation rate for Black men also increased in June - a sign that more men tried to look for work but were not able to land new jobs, said Wilson.

The overall drop in the Black unemployment rate in June was driven by women, who may have been called back to work at bars, restaurants and retail stores re-opened, reversing some job losses they suffered in March and April. The unemployment rate for Black women dropped to 14% from 16.5% in May.

For a graphic on The African American jobless rate: 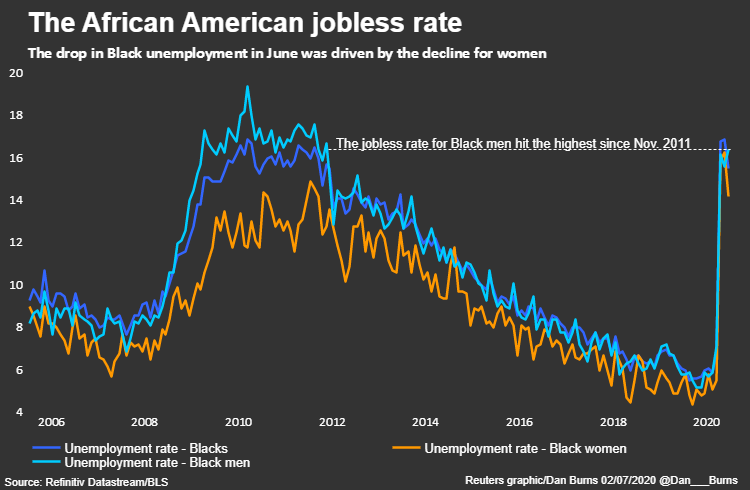 The widening spread in jobless rates in the last two months has undone years of gains that slowly narrowed the gap in unemployment rates between Blacks and whites.