The auto sector suffers, there's new hope for Boeing, and Nike is doing rather well so far, amid the coronavirus outbreak. Facebook sees its business jump, but not its revenues.

Cost cutting. According to information from the Wall Street Journal, Occidental Petroleum has reduced the salaries of its employees and staff by up to 30% in an attempt to cut costs. The American group, heavily indebted since the expensive acquisition of Anadarko in 2019, is facing a fall of more than 60% in oil prices since the beginning of the year. CEO Vicki Hollub has set an example by accepting an 81% reduction in her remuneration.

Less turbulence. Boeing plans to resume production of the 737 MAX by May, according to information obtained by Reuters. Yesterday, the U.S. group's stock rebounded by nearly 21% at the close, contributing to a historic performance by the Dow Jones. The new CEO, Dave Calhoun, was confident that the 737 MAX will be back in operation by mid 2020.

Extended status quo. U.S. automakers Ford, General Motors and Fiat Chrysler are likely to maintain their production freeze for part of April. Initially, an initial date was set for March 30, but it will probably not be met under the circumstances. The three groups have not been able to set a resumption date at this stage. Together with the tourism and oil industries, the automotive sector is one of the sectors of the economy most affected by the current crisis.

A merger complicated by the virus. Rumors are circulating that the Peugeot and Fiat Chrysler merger, or at least the initial financial terms, may be called into question. The original information was obtained by AFP on the basis of credible financial sources. However, the preparatory work is continuing. "The two groups need this merger in view of the heavy investments that need to be made in the electric car, but it must be acknowledged that, given the economic situation, for the merger to go ahead the initial financial terms need to be reviewed," an informant told AFP.

Traffic, not revenue. Facebook has been hit by the coronavirus, which is weighing on advertising sales. "We have seen a drop in advertising revenue in countries that are taking radical measures to combat VIDOC-19," the company said in a press release.

Nike was solid until the end of February. Nike surprised investors by the robustness of its quarterly results. The American group, which reopened 80% of its stores in China, reported a 5% increase in sales to $10.1 billion for the quarter ended February 29, the third of its 2019/2020 fiscal year. Over the period, online sales jumped 36%. However, Nike's quarter does not include the month of March, which was the most severely affected by the crisis.

In other news. Uber has filed a lawsuit against the Los Angeles Department of Transportation over data sharing. The Federal Reserve called on BlackRock to buy back bonds on behalf of the authorities. Partners Therapeutics is testing Leukine against coronavirus. Softbank had at one time thought of going public and discussed the project with Elliott or Mubadala, reveals the Financial Times, before opting for divestments and a share buyback. Delta Air Lines' debt is being downgraded to speculative grade. Whirlpool gives up its objectives. 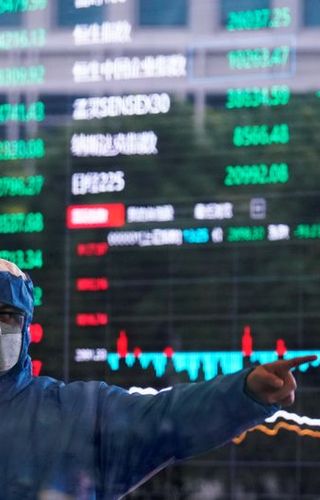