European shares enjoyed their best day in nearly eight weeks on Monday, with cyclical sectors soaring as an easing of lockdowns and an encouraging report on a potential COVID-19 vaccine boosted hopes of a swifter economic recovery.

Miners leapt 8%, leading Europe's sectoral gains, while automakers, oil and gas and travel and leisure indexes - typically reliant on the health of a global economy that has taken a battering due to the coronavirus crisis - gained between 6.5% and 7.9%.

The two countries called for the creation of a European Recovery Fund worth 500 billion euros ($544 billion) to help the region quickly exit the crisis.

The single biggest boost to the STOXX 600 was France's Total, which surged 7.4% after it agreed to buy assets from Energías de Portugal.

The pan-European STOXX 600 rose 4.1%, in its biggest one-day percentage gain since March 24.

"Everything seemed to go right for risk appetite today and that will not likely be story going forward," said Oanda's senior market analyst Edward Moya.

"A vaccine is a gamechanger for the prospects of economic activity to return to pre-virus levels, but that is still months away from being finalized."

Governments and central banks globally have unleashed unprecedented stimulus to prop up the economy, helping the STOXX 600 recover 27% from its March lows as investors also hope for a gradual return to normal.

Shops, restaurants and hair salons prepared to reopen in Italy on Monday, while other centres of the outbreak such as New York and Spain gradually lifted restrictions.

"Post the strong rally in equity markets from the lows, we believe this economic upturn is already largely priced in," Morgan Stanley's European equity strategist Graham Secker said in a client note.

"We think valuations look full as we see further earnings downgrades as necessary for 2H20 and into 2021."

For a graphic on U.S. & Europe valuations break above long-term averages: 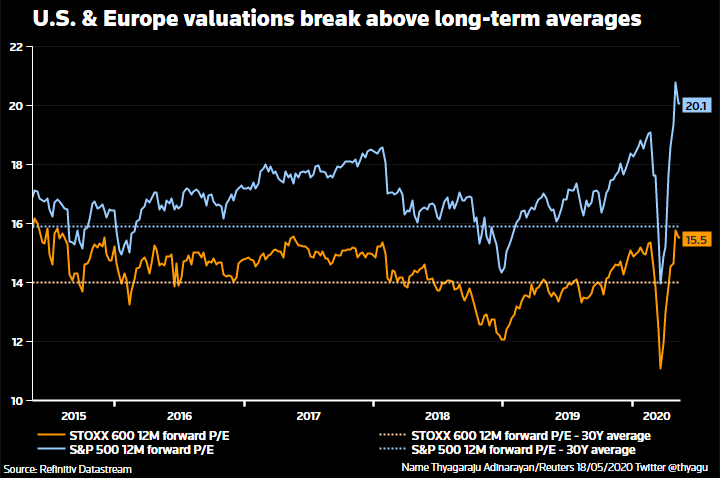 French automakers Renault and Peugeot SA gained 8.7% each after finance minister Bruno Le Maire told a local radio channel the government was hoping to announce a plan within 15 days to help the country's automobile sector.

German conglomerate Thyssenkrupp AG jumped 12.5% after a source told Reuters it was in talks with international peers about consolidating its loss-making steel business.

Ryanair shares surged 15.8% after Europe's largest low-cost carrier announced details of sharp cost cuts and promised a swift return to full capacity and expansion in the aftermath of the COVID-19 crisis.

Among decliners, Norwegian Air Shuttle ASA shares tumbled 22.3% as the company said its issue of new equity was completed.

(Reporting by Sruthi Shankar in Bengaluru; graphics by Thyagaraju Adinarayan in London; editing by Shounak Dasgupta and Mark Potter)