A handful of negative company updates from Britain and France knocked European shares off record highs hit earlier in the session on Friday, while investors grappled with the impact of the coronavirus outbreak on global growth.

The pan-European STOXX 600 closed down 0.1% after notching up a new high of 432.26 points in early afternoon trading.

London's FTSE 100 underperformed its European peers with a 0.6% drop, as drugmaker AstraZeneca forecast a possible slowdown in revenue growth this year, assuming a hit from China's coronavirus epidemic.

Cosmetics group L'Oreal as well as spirits makers Remy Cointreau SA and Pernod Ricard fell between 0.5% and 1.2% after the rating cut.

"The weekend provides plenty of scope for unpleasant surprises, hence the cautious attitude displayed by risk assets on most Fridays in the year so far," Chris Beauchamp, chief market analyst at IG, wrote in a client note.

"But it has been yet another week where downside has failed to materialise in any real fashion, leaving investors with nothing to do but keep buying into the rally."

Despite the uncertainties, the main STOXX 600 recorded its second consecutive weekly gain as investors clung to hopes that the damage to the global economy from China's coronavirus outbreak will be short-lived.

The World Health Organization said a large jump in new coronavirus cases seen on Thursday was due to a change in classification methods, and did not necessarily reflect the "tip of an iceberg" of a wider epidemic.

That helped investors to take a batch of downbeat data in stride. Figures showed euro zone economic growth slowed as expected in the fourth quarter, but employment growth picked up more than expected.

Other data showed the German economy stagnated in the same period due to weaker private consumption and state spending, raising the risk of a recession in an economy hit by weak manufacturing activity.

German stocks ended flat, but recorded a weekly gain of 1.7%.

Real estate <.SX86P> and utilities <.SX6P> were the best performing European sectors for the day, rising about 1.5% each.

Utilities were boosted by France's Electricite de France SA, which topped the STOXX 600 after its annual core earnings beat expectations.

However, there was no update on an outside audit to address Financial Times allegations of fraud and false accounting that have dogged the Munich-based company. Wirecard has said the allegations are unfounded.

Royal Bank of Scotland's slumped 6.8% after flagging a new strategy to cut back its investment bank and rename the company.

UK's exporter-heavy index finished the week with a 0.8% drop, hit by a pound that has firmed on expectations the new British finance minister would unveil a more expansionary budget next month. 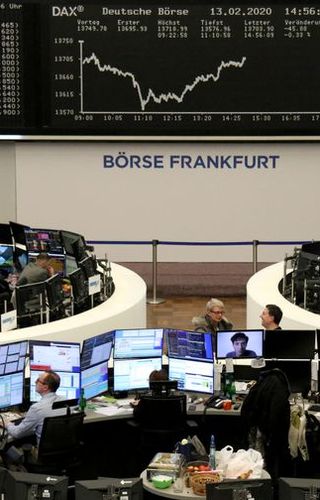