The dollar dropped broadly on Thursday after an unprecedented rise in jobless claims led investors to anticipate that the U.S. government and Federal Reserve would take new steps to stimulate the economy.

The number of Americans filing claims for unemployment benefits surged to a record of more than 3 million last week as strict measures to contain the coronavirus pandemic brought the country to a sudden halt, unleashing a wave of layoffs that likely ended the longest employment boom in U.S. history.

?The number has sent chills through the markets. If these numbers continue for three or four weeks, there will be demand for more fiscal support," and even more monetary support from the Fed, said Quincy Krosby, chief market strategist at Prudential Financial in Newark, New Jersey.

The jobless blowout was announced shortly after Federal Reserve Chairman Jerome Powell said that the U.S. "may well be in recession" but progress in controlling the spread of the coronavirus will dictate when the economy can fully reopen. His remarks were an unusual acknowledgement by a Fed chair that the economy may be contracting even before data confirms it.

Stocks rallied for the third day despite the dour number, as investors focused on the prospect of additional stimulus.

The U.S. Senate on Wednesday unanimously backed a $2 trillion bill aimed at helping unemployed workers and industries hurt by the coronavirus epidemic, as well as providing billions of dollars to buy urgently needed medical equipment.

House Speaker Nancy Pelosi said the next step would be legislation to address family leave, pensions, food aid and more assistance to state and local government, saying that there is no question that more money will be needed.

But many analysts see volatility in markets persisting until the worst of the virus and its effects have passed.

?Although the latest Fed measures have helped calm markets, as long as the Covid-19 crisis continues and the world economy is effectively in lockdown, we would expect markets to remain in turmoil,? foreign 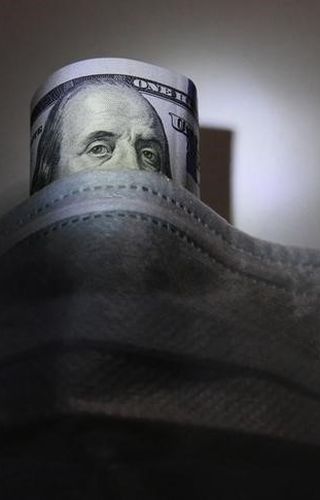