Buenos Aires bonds added to recent losses on Tuesday after the province asked holders for an extension on a more than $250 million payment due later this month, dragging Argentina's debt lower as well.

The province needs consent by 75% of bondholders for the extension to go into effect.

The Buenos Aires debt negotiation is seen by some as a trial balloon for how Argentina will handle the renegotiation of about $100 billion in sovereign debt inherited by the administration of center-left President Alberto Fernandez.

Argentine national bonds were also trading lower, with the January 2028 benchmark <040114HQ6=> down 1.5 points, according to Refinitiv data. Over-the-counter bonds were down an average 0.7% on the announcement as country risk rose 36 basis points to 1,854, as measured by the JPMorgan EMBI Plus index.

The decline in the sovereign bonds could be in sympathy with the provincial debt since "there’s still people overweight Argentina, so there’s potentially more sellers because it has done well recently," said Cathy Hepworth, co-head of emerging market debt at PGIM Fixed Income, which has exposure to both Argentina and Buenos Aires.

However, she said, the negotiations shouldn’t be taken as a mirror image because "we will have more information and therefore more substance if we wait for clarity on the sovereign restructuring."

Buenos Aires Governor Axel Kicillof said that the amount of debt accumulated under his predecessor Maria Eugenia Vidal, an ally of conservative former President Mauricio Macri, was "unsustainable." Vidal lost her re-election bid to Kicillof, who is part of Fernandez's coalition, in October.

"We expect creditors to act in good faith, as we will, so that the resolution is not disorderly," Kicillof said during a news conference.

A spokeswoman for the government of Buenos Aires Province told Reuters that conversations with bondholders had already taken place.

"There is not a concrete answer yet. But there is an understanding of the difficult situation facing the province," she said.

A private holder of the 10.875% bond due in 2021, asking not to be named, told Reuters his first reaction on hearing about the province's request for a payment extension was "God, I hope they pay in May."

"My personal impression is that they bought time to wait for the national government to negotiate the sovereign debt," the bondholder added.

Siobhan Morden, head of Latin America fixed income strategy at Amherst Pierpont Securities in New York, said in a Tuesday note to clients that the province's payment delay might not bode well for holders of sovereign debt.

"There is no cross default between the sovereign and the provinces; however, a potential hard default for the Province of Buenos Aires raises the concern about cashflow stress and an orderly restructuring for any potential litigant risks or economic contagion from weaker domestic sentiment," Morden said.

A spokesman for Economy Minister Martin Guzman declined to comment on the fall in Argentine national bonds on Tuesday.

Provincial bonds maturing this year and through 2027, including the January 2021 maturity, tumbled on Monday after Guzman confirmed in an interview published over the weekend that the national government would not help Buenos Aires Province, Argentina's largest, with the payments.

Fernandez, who set a March 31 deadline to renegotiate Argentina's rampant public debt, reiterated that the national government would not bail out the province in an interview on Monday night.

Argentina has been spiralling into a debt crisis since 2018. Macri, who fell out of favour with voters exhausted by crippling inflation and a weakened currency, was defeated by Fernandez on Oct. 27.

The Fernandez administration, which took office on Dec. 10, is in talks with bondholders and other creditors, including the International Monetary Fund.

By Cassandra Garrison and Rodrigo Campos 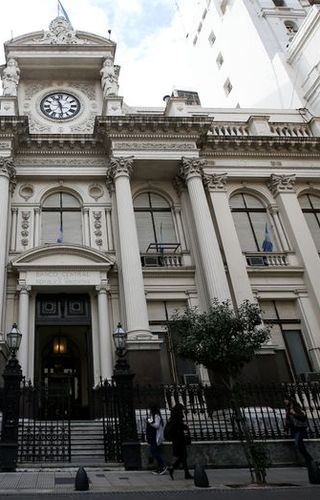