Amid worsening pandemic, Trump pushes to re-open U.S. for business by Easter

U.S. President Donald Trump pressed his case on Tuesday for a re-opening of the U.S. economy by mid-April despite a surge in coronavirus cases, downplaying the pandemic as he did in its early stages by comparing it to the seasonal flu.

Trump and his coronavirus team on March 16 put in place recommendations for people across the country to cut down social and professional interactions for 15 days in a bid to reduce the virus' spread.

But the president, a Republican who is seeking re-election in November, has begun to chafe at the economic repercussions.

During a live town hall broadcast on Fox News Channel and later at a briefing with reporters at the White House, he said he would like to have businesses opening their doors again by Easter, which will be celebrated on April 12.

"I would love to have the country opened up and just raring to go by Easter," he said on Fox.

The president said the country did not take drastic measures to fight car crashes and flu deaths similar to those it is taking for the coronavirus. He said Americans could continue practicing social-distancing measures, which health experts say are crucial to prevent infection, while also going back to work.

"We lose thousands and thousands of people a year to the flu. We don't turn the country off," Trump said. "You can destroy a country this way by closing it down."

Health experts have warned that the best way to stop the spread of the virus is for people to stay home.

At a briefing with reporters later in the day, he seemed to soften his stance somewhat, saying he would make the decision based on advice from experts, including Anthony Fauci, director of the National Institute of Allergy and Infectious Diseases, and Deborah Birx, who is helping lead the White House coronavirus tax force. Both doctors stood with Trump at the briefing.

Fauci said a deadline would be flexible. Trump said he would make the decision based on facts and data but stuck with his Easter timeframe, which he described as "beautiful."

Public health experts, economists and other professionals were "working to develop a sophisticated plan to reopen the economy as soon as the time is ripe - one based on the best science, the best modeling and the best medical research," he said.

Houses of worship have closed to avoid letting the virus spread. Trump told Fox in a separate interview that seeing churches packed on Easter would be "a beautiful thing."

The White House's guidelines currently include an admonition that members of the public not gather in groups larger than 10 and avoid dining out in restaurants or bars.

The president's desire to get the economy back to normal quickly has drawn criticism from Democrats and Republicans as the Pentagon and others forecast the outbreak could last for months.

Maryland Governor Larry Hogan, a Republican, told CNN on Tuesday: "We don't think that we're going to be in any way ready to be out of this in five or six days or so, or whenever this 15 days is up from the time that they started this imaginary clock."

The mayor of New York City, the epicentre of the nation's coronavirus epidemic, said he expected April to be tougher than March and that May would be tougher than April.

"That's how severe it is," Bill de Blasio, a Democrat, told Fox News.

Former Vice President Joe Biden, the frontrunner to become the Democratic presidential nominee who will run against Trump in this year's election, said an Easter timeline was not realistic. "That would be a real resurrection," he told MSNBC.

Vice President Mike Pence touted the White House's recommendations during the Fox town hall while also saying the federal government would defer to states' more stringent ones for their populations.

Fox has come under criticism for its own treatment of the virus as some opinion program hosts played it down in the early period of its spread.

The president, who said early in the crisis the virus was under control, has been stunned by its impact on the economy. The president spent much of his first three years in office touting the rise of the stock market and the country's economic strength.

"Our people want to return to work," he said on Twitter earlier on Tuesday. "They will practice Social Distancing and all else, and Seniors will be watched over protectively & lovingly. We can do two things together. THE CURE CANNOT BE WORSE (by far) THAN THE PROBLEM!"

Trump said the sharp rise in stocks on Tuesday was thanks in part to his push to re-open the economy, in addition to investor optimism about a congressional stimulus package. The Dow made its biggest one-day percentage gain since 1933.

Trump and his economic and health advisers are mulling how to proceed after the 15-day period of tough measures to slow the pandemic.

White House economic adviser Larry Kudlow, speaking to reporters at the White House, said the administration was looking at low-infection areas where the economy might be reopened after the shutdown period ends next week.

By Steve Holland and Jeff Mason 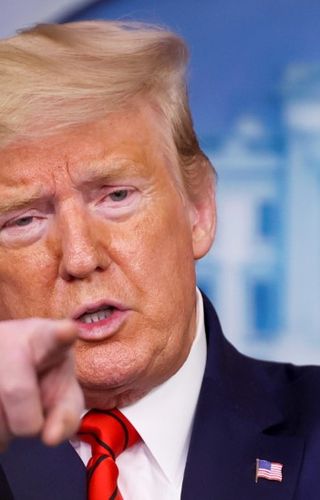