Stock markets soared on Tuesday, with a gauge of global equities posting its biggest gain since the coronavirus roiled financial markets a month ago, as the U.S. Congress zoned in on a $2 trillion (1.7 trillion pounds) stimulus package to curb the pandemic's economic toll.

Senate Majority Leader Mitch McConnell said a deal was "very close" for an aid package that investors hoped would turn around markets reeling from the biggest downturn since the global financial crisis more than a decade ago.

The market rally came a day after the U.S. Federal Reserve's offer of unlimited bond-buying to help avert a global depression failed to persuade skittish investors, at least initially.

The mood improved on Tuesday, with U.S. gold futures climbing as much as 6.7% to $1,672.60 an ounce and the dollar halting its steady rise as the moves by the Fed and others eased the need for cash and slashed the demand for dollars.

The rally led some to suggest a rout that has trimmed U.S. and European equities by roughly 30% in the past month may be near an end.

"We're seeing some signs that a bottoming is happening," said Neel Shah, senior trader at Peak6 Capital Management. "The next big step is the Senate passing the stimulus bill."

U.S. and European stocks jumped 6% or more and the dollar index, a basket of major trading currencies, slid.

MSCI's gauge of stocks across the globe <.MIWD00000PUS> gained 8.39%, the largest single-day gain since equities tumbled from all-time highs a month ago and since the height of the global financial crisis in October 2008.

The broad pan-European STOXX 600 index rose 8.40%, its strongest session since late-2008. The index is still down about 30% from a record peak hit in February.

The rally was wide, lifting most stocks, with only 11 S&P 500 stocks declining on the day.

Measures the Fed unveiled on Monday to boost liquidity across debt markets and backstop lending were seen by investors as helping market conditions.

"The Fed's measures are unprecedented, and they have been extremely proactive in preventing this external shock from morphing into a wider funding crisis," said Vasileios Gkionakis, head of FX strategy at Lombard Odier.

The Fed also will expand its mandate to buy corporate and municipal bonds and backstop a series of other measures that analysts estimate will deliver more than $4 trillion in loans to non-financial firms.

Still, investors remained wary, as the number of coronavirus infections globally neared 400,000 and new infections brought in from abroad rose in China.

Business activity collapsed from Australia and Japan to Western Europe at a record pace in March, as measures to contain the outbreak hammered the world economy, and Japan said it was postponing the Olympics.

IHS Markit's flash composite Purchasing Managers' Index (PMI) for the euro zone, seen as a good gauge of economic health, plummeted to a record low of 31.4 in March, the biggest one-month fall since the survey began in 1998.

The government and central bank financial support helped calm nerves in bond markets, where yields on two-year U.S. Treasuries hit their lowest since 2013.

Germany's 10-year yield was up 2 basis points on the day at -0.36%, compared with a 4 bps rise before the purchasing managers index (PMI) releases, all small moves when compared to record lows hit at -0.90% earlier in March.

ALL ABOUT THE ECONOMY

The impact of the virus on the global economy is evident in a series of growth forecast downgrades and advance readings of PMIs across the world's biggest economies.

However, the prospect of massive Fed funding pushed the greenback 0.26% lower against rivals, off three-year peaks <=USD>, falling against the yen and sliding 1% versus the euro.

Graphic: Volatility is back on Wall Street 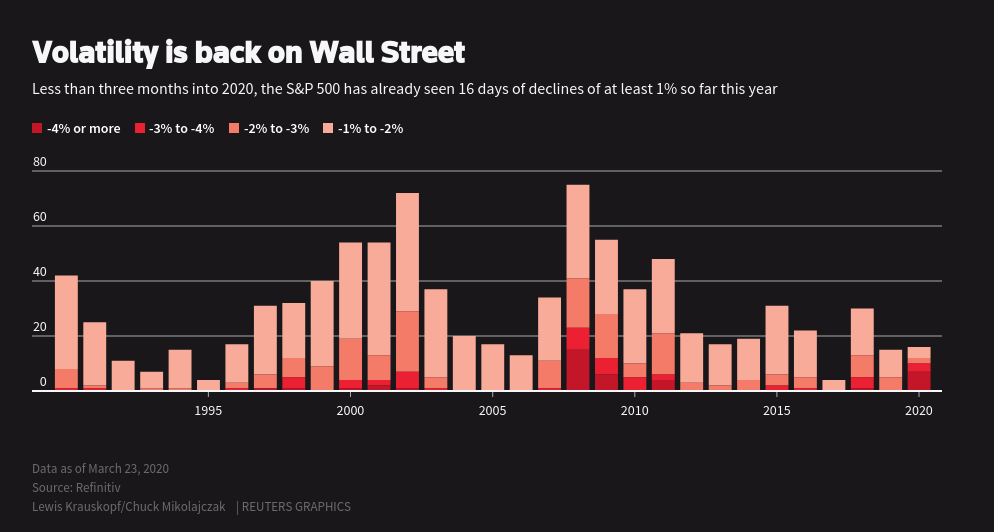 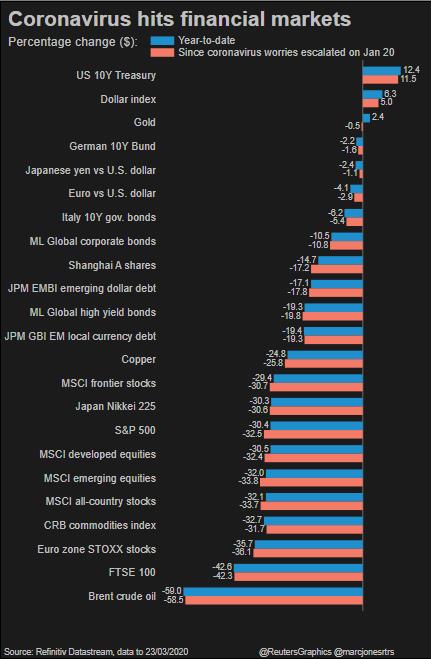 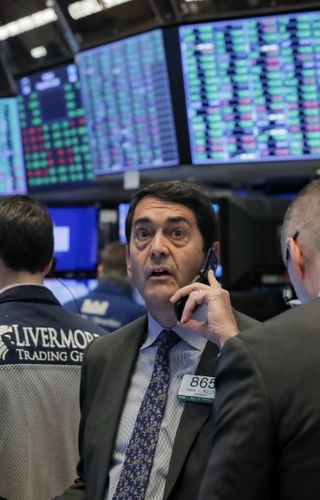